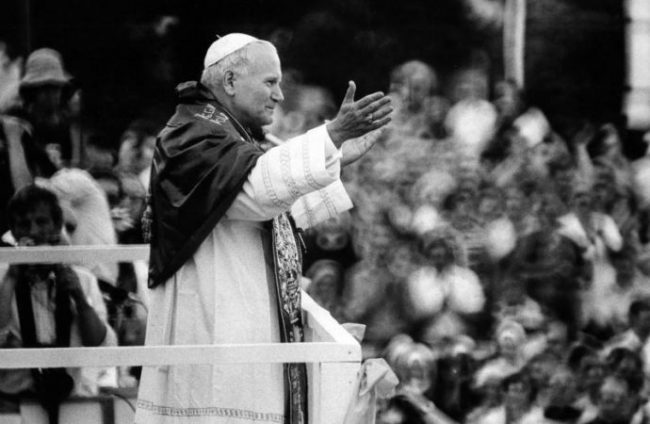 St. John Paul II greets throngs of Poles waiting for a glimpse of their native son at the monastery of Jasna Gora in Czestochowa during his 1979 trip to Poland. (Credit: Chris Niedenthal/CNS.)

ROME – One hundred years after the birth of Saint John Paul II, Pope Francis Monday called the Polish Pope a gift to the Church and a model pastor who prays, is close to his people and who exercises both justice and mercy.

Speaking in front of St. John Paul II’s tomb in the Vatican, Francis pointed to the day’s psalm response, “The Lord loves his people,” saying that out of this love God “sent a prophet, a man of God, and the people’s reaction was, ‘The Lord has visited his people, because he loved us.’”

Pope Francis celebrated Mass May 18 in the chapel housing John Paul II’s tomb inside St. Peter’s Basilica to mark the centenary anniversary of his predecessor’s birth.

In his homily, Francis said John Paul II embodied many traits of a good pastor, pointing to three specifically: Prayer, closeness to the people, and a love of justice.

“Saint John Paul II was a man of God because he prayed. He prayed a lot,” the pope said, asking, “How can a man who has so much to do, so much work in guiding the Church, have so much time for prayer?”

John Paul II knew this, “and he did it,” Francis said, calling him, “A model of a bishop who prays. He taught us that when a bishop does an examination of conscience at night, he must ask himself, how many hours did I pray today?”

Pope Francis also hailed his predecessor as a man who was never detached from his people, but always close to them.

John Paul, he said, “went to find the people. Throughout the whole world, he went to visit his people, searching for his people, making himself close.”

“Closeness is one of the traits of God with his people,” the pope said, insisting that a priest who is not close to his people “is not a pastor. He’s a hierarch, an administrator, maybe even a good one, but he’s not a pastor.”

“Saint John Paul II gave us an example of this closeness, to the great and the small, to the close and the far away,” he said, noting that, “he always drew them near.”

Francis also praised John Paul II for his “love of justice,” insisting that it was “full justice,” for society and its people, and which “made wars go away.”

“Because of this, Saint John Paul II was a man of mercy,” he said, “because justice and mercy go together. You cannot distinguish. They are together. Justice is justice, mercy is mercy, but one without the other is not possible.”

“He felt that God’s justice had this face of mercy, this attitude of mercy. This is a gift that he left us: Merciful justice, and just mercy,” he said, and closed his homily asking John Paul II to intercede for the entire Church, not just its pastors, to receive “the grace of prayer, the grace of closeness and the grace of justice and mercy.”

Monday also marked Pope Francis’s last live-streamed daily Mass, since Italy, as of May 18, had green-lighted the celebration of public Masses again amid the lifting of the country’s coronavirus lockdown.

This article was first published in CruxNow