Over one week in late March the relics of one of the most loved saints of modern times – St Therese of Lisieux, the Little Flower – will tour churches, a Carmelite monastery and one school in the Archdiocese of Canberra and Goulburn.

Catholics from across our vast Archdiocese are expected in big numbers to a range of services including Masses, overnight vigils and prayer services when the relics of St Therese of Lisieux visit from 25-31 March.

When St Therese’s relics last visited Australia in 2002 an estimated 700,000 Catholics turned out to pray seeking her intercession. Greater numbers are expected on this tour.

On this occasion her relics will be accompanied by those of two other modern saints: her mother, Zelie and father Louis.

The dates and locations of the visit of the relics of the three saints from the one family were issued in December by Catholic Mission, the Church’s agency in Australia which supports missionaries around the world.

Saints Louis and Zelie Martin are the first married couple to be canonised in the history of the Church, reflecting in part the repeated urgings of the-then Pope John Paul II to find lay candidates whose causes might be promoted.

Throughout his papacy St John Paul II repeatedly called for ordinary laity – men, women and youth – who might be canonised to emphasise the call to personal holiness expressed by our baptismal vocation.  This was also strongly emphasised by Vatican II. 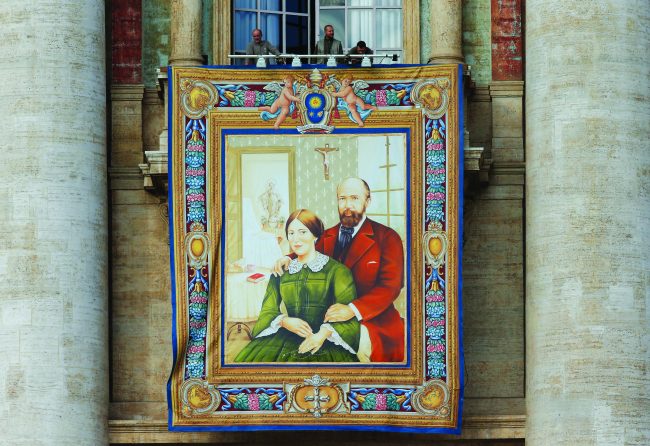 Workers prepare a banner of Louis and Marie Zelie Guerin Martin, the parents of St. Therese of Lisieux, on the facade of St. Peter’s Basilica at the Vatican Oct. 16 in advance of a canonization. (CNS photo/Paul Haring)

The relics of the three modern saints will spend two and a half months touring Australian diocese from January 22 to May 10.

There are few – if any – other saints so beloved in the modern Church.

Although she died virtually unknown at the age of 24 in her monastery at Lisieux in France after having more or less forced her way into being accepted as an underage Carmelite at the age of 15, Therese is regarded as a giant of the Christian vocation to holiness. She died in 1897 but her writings and her reputation for an astonishing (but at the time largely-hidden) sanctity saw public demand for her canonisation continue to grow until she was officially beatified by Pope Benedict XV in 1921 and declared a saint by Pope Pius XI in 1925.

Despite never having set foot outside her monastery after entering, she was named in 1927 as co-patron of the Church’s entire global missionary effort, joining the legendary 16th Century Jesuit missionary, St Francis Xavier.

In 1997 Pope John Paul II declared her to be a Doctor of the Church,  a title which means an individual is recognised by the Church as a gifted teacher of the Christian faith.  She became the 33rd  person to be so recognised in the history of the Church.

Therese was also the youngest, and only the third of four women to be recognised with the title; the three others are fellow Carmelite St Teresa of Avila, St Catherine of Siena and St Hildegard of Bingen.

Therese’s appeal has grown steadily since her death.

Key to her influence on the modern Church is the only work she ever wrote, a series of letters on her spiritual journey, which were edited by her sister who also became a Carmelite and eventually published under the title of The Story of a Soul.

In her letters, Therese set out her famous ‘Little Way’ to holiness, which was to seek friendship with God in the small, ordinary daily events of life rather than big achievements or widespread influence.

Circulated first to other Carmelite monasteries, the book was published a year after her death and has had a phenomenal impact on the Church.  It has never gone out of print.

Modern devotees of St Therese have included Beat Generation writer Jack Kerouac, philosopher and Nobel Prize winner Henri Bergson, legendary French singer Edith Piaf who maintained that she was cured of blindness as a child through St Therese’s intercession, and Mother (now Saint) Teresa of Kolkata, founder of the Missionaries of Charity, who chose Therese for her own name as a religious sister. 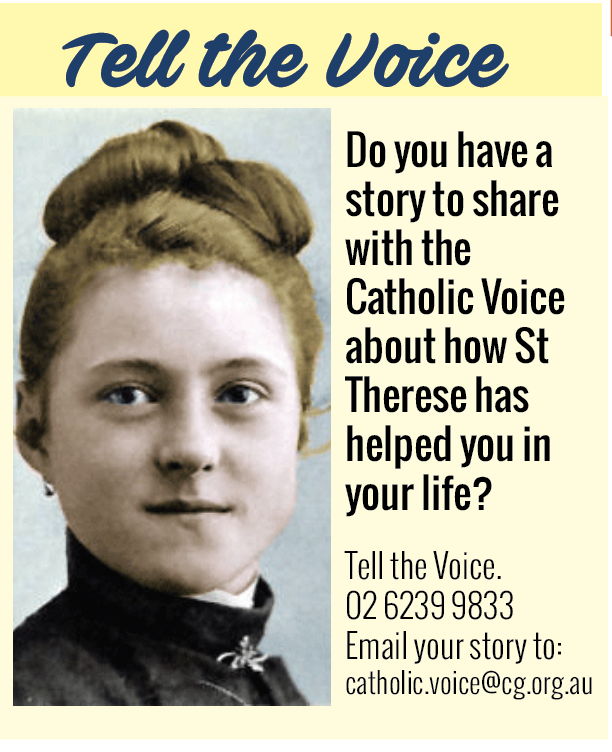 Itinerary: Archdiocese of Canberra and Goulburn

Fr Joshua Scott: Looking back on 2019