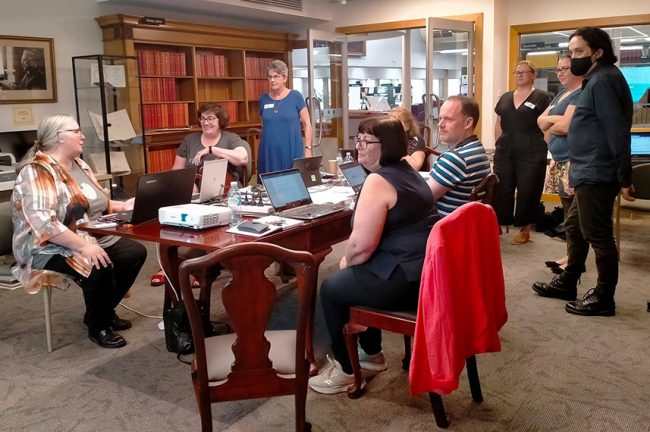 Men are from Mars, Women are from Venus is the title from a popular book and when it comes to Wikipedia entries it appears the Martian males dominate

Studies over the years have shown that the number of biographical articles submitted and edited on the online encyclopaedia giant are heavily skewed in favour of male entries.

Kerrie Burn of the Mannix Library in Melbourne is the driving force behind Australia’s contribution to international efforts that are targeted at boosting the number of biographical articles of women in religion that appear on Wikipedia.

“It’s a really exciting project to be involved in,” Kerrie says.

With Wikimedia Australia’s help, she recently hosted her own “edit-a-thon” in Melbourne that saw eight volunteer editors (seven female and one male) come together to edit and produce Wikipedia articles to support Australia’s input to the global project. Contributors hard at work at the Melbourne Wikipedia “edit-a-thon

At day’s end, seven articles had been created and five updated.

“I really love it but it’s been a huge amount of work, especially in the data gathering,” says Kerrie.

“Huge amounts are still to be done”

She’s got an initial list of 450 Australian historical and contemporary women of various religious denominations to work through as potential candidates to determine if they meet Wikipedia’s “notability” and other criteria for publishing online.

The project has created 41 articles so far with four being created every week.

The goal is to create 100 new articles this year.

Pause for Parramatta RE Curriculum

An immediate pause of the draft new curriculum for religious education in the Diocese of Parramatta has been met with reactions including surprise, gratitude and ... Read More