Homeless children in the Philippines find a home and education, thanks Fr. Matthieu Dauchez and the ANAK-Tnk Foundation. 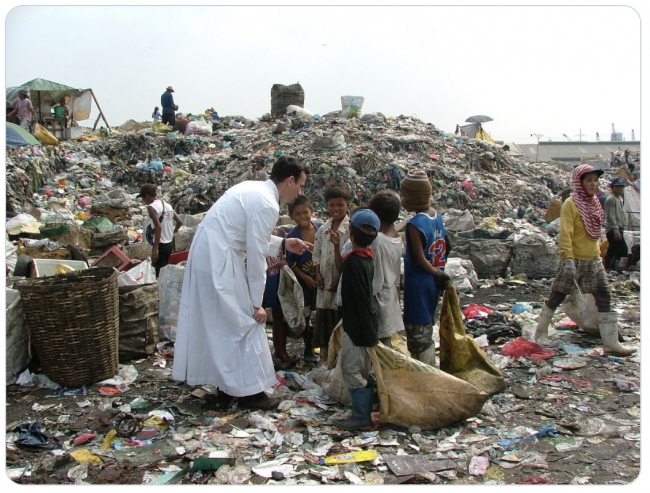 Fr. Matthieu Dauchez is a French priest who works in Manila, Philippines, as the director of the ANAK-Tnk foundation, which helps street children in the poorest areas of the capital city. The foundation has already helped more than 50,000 children in its 22 years of existence.

The organization takes in children who live on the street, abandoned by their families and by society, who live by begging, foraging in garbage dumps, and sometimes by prostitution. These children are often victims of abuse, drugs, and crime. Fr. Matthieu and his team of volunteers seek the children out and invite them to the foundation, where they receive lodging, food, education, and other forms of support

In an interview with France 24, Fr. Dauchez explains that working with these children is harder than it sounds. In order even to start helping them materially, they have to be reached emotionally and psychologically first. When offered the foundation’s help, their first reaction is often to reject it, out of fear that the offer is too good to be true.

“They have been rejected by their own parents or their own family. They are deeply wounded,” he says. They prefer to stay on the streets, which have become their refuge. Building trust is the first step, he explains.

In an interview with Charis (Caritas Humanitarian Aid & Relieve Initiative Singapore), Fr. Dauchez touches on this challenge again, and also on the rewards of their work:

The greatest challenge is to lead these rejected and abused children to forgiveness, which is in fact impossible for men, but everything is possible for God. Thus, our mission is more to prepare them in order for the Lord to heal the wounds of their hearts. The greatest reward is to see former children of the foundation, who become parents themselves, showing such great and beautiful love to their own children.

ANAK-Tnk helps the children to become aware of their human dignity as children of God, and to learn new and better perspectives on life. Their labor is bearing fruit; one of the children they helped, Darwin Ramos, is a candidate for beatification.

Reflecting in the France 24 interview on the question of why God allows evil in the world, Fr. Dauchez says that the problem of evil is impossible to explain. We cannot, however, allow ourselves to freeze in response to this conundrum; more important than looking for understanding is the answer we give with our own actions, he says. “We can act against evil. We can act against violence, against prostitution, against sexual abuse, against all this evil in our world. We can act, and we must act!”

Prayer is a fundamental part of the project. The name of the foundation means “child” (anak) and “bridge for the children” (Tnk is the abbreviation of “tulay ng kabataa” in Tagalog, the language most spoken in the Philippines).

During his 2015 visit to the Philippines, Pope Francis met with approximately 300 children whom the foundation has helped. (Watch the video above)

It was certainly the Holy Spirit, through the intercession of Mary, our Mother, who inspired my Capuchin superiors to send me to work at the ... Read More