The Scope of Conversion 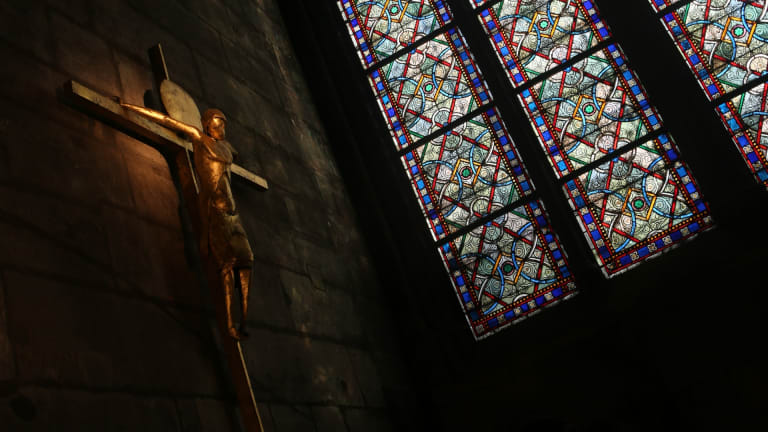 Clearly, a religious aspect is the most evident dimension of what is commonly referred to as ‘conversion’. Faith in Christ means self-surrender to God and the cause of the Kingdom. This level of conversion is lived out in prayer, adoration, thanksgiving, praise, and love. The liturgy calls forth such acts to form a community of those who adore God, rejoice in his gifts and witness to his presence through all creation: ‘Through him, with him and in him, in the unity of the Holy Spirit, all glory and honour be yours, almighty Father, forever and ever’. Intrinsic to this aspect of conversion are limitless possibilities of development, as when believers become mystics, to experience God in love’s ‘cloud of unknowing,’ and long for the fullness of union with God in face-to-face vision.

This largely tacit aspect of conversion focuses on the ‘No-thing’ of the divine mystery. There is an infinite love that means the world to those who surrender to it even if it leaves them in the struggles of history with nothing but God as their support and goal. For each age has its kind of idolatrous projections to the detriment of an authentic adoration of the God of the crucified Jesus: the last words of the First Letter of John are relevant at every stage, ‘Little children, keep yourselves from idols’ (1 John 4:21).

Secondly, conversion inspires a fuller moral conversion as faith manifests itself in an increasingly refined conscience. Even the greatest mystics and martyrs of the past could not live out the totality of the moral response consonant with God’s universal creative and compassionate love. Past moral teaching certainly enumerated the theological and moral virtues, the gifts of the Holy Spirit and the inspiration of the beatitudes. But history presents the tradition with the challenge to progress ever further in collaboration with all people of good will to bring about, in the light of Christ, a transparent anticipation of God’s reign.

There have been social situations of oppression and indifference to suffering, as in the cases of slavery, economic exploitation, destruction of the environment, autocratic regimes, colonial subjugation, political corruption and domination of women, that have been barely registered in the conscience of good people in former ages. But now, in the Spirit-guided learning and teaching of the Church – in collaboration with all people of good will – these evils can be promptly identified and diagnosed. Where previously moral conversion formerly found its authentic measure mainly on the micro-level of personal relations, it is now impelled to be active on the macro-level of social, political, and economic structures. Loving one’s neighbour has come to include not only compassion for that neighbour in need but also love for the neighbourhood– understood in its ecological, environmental, political and economic dimensions. The ‘little children’ of 1 John that are warned to keep themselves from idols (1 John 4:21), are also asked, ‘How does God’s love abide in anyone who has the world’s goods and sees a brother or sister in need, and refuses help?’ (3:17). They are exhorted to love, ‘not in word or speech, but in truth and action’ (3:18).
Conversion also has its intellectual component. The faithful need not become philosophers, but they do need to make alliances with all seekers after truth, be it through philosophy, science, art, the media or scholarship. Within faith itself, there is the drive to understand and articulate the revealed mysteries in an intelligence worthy of them. There is intrinsic objectivity in the judgments of faith. The revealed mysteries express ultimate realities, the source, and goal of all that is. The persistent doctrinal effort of the Church to articulate more clearly what it believes testifies to the demand for a continuing conversion from error, ambiguity and limited perspectives to a fuller grasp of the truth and a broader engagement with its meaning in different cultural contexts.

Finally, I would suggest a dimension of ‘historical’ conversion, both personal and communal, occurring within the development of doctrine. While her essential mission to witness to the Gospel in word, deed and sacrament remain, the Church, in different periods of her history, experiences a distinctive vocation relative to the ‘signs of the times.’ In this regard, the Church after Vatican II is not that of Vatican I or Trent or Lateran IV or Chalcedon. The one Catholic tradition of change and conversion enabled the Church in each of these conciliar situations to be what it needed to be in the service of the Gospel. The mission of the Church is to be realised in various historical vocations. For example, in communicating with other Christians and with other faiths, doctrines concerning the Trinity, the Incarnation, and eternal life are of much greater importance than, say, papal infallibility or the sacramentality of confirmation. Conversion means dialogue with those outside the Catholic communion. A shared search for the fullest understanding of God’s saving will cannot but suggest how the elements of Catholic tradition must be ranked in a certain order of importance, That will tend to establish areas of common ground, without the knockdown conflicts characteristic of less happy times. Vatican II’s reference to the ‘hierarchy of truths’ in Catholic teaching is a precious reference in this regard.

What this historical vocation might be in the third millennium might be a matter of some conjecture. Nonetheless, the Church has within itself an imperative to respond in whatever direction the Spirit leads. The scope of conversion has unfolded into a period of immense possibilities in this time of ecumenical, inter-faith, and deeply secularised context of the contemporary world. At the beginning of this millennium, John Thornhill, SM, argued that modern culture, once purged of its prejudices and shortcomings, offers Christian faith a scope and opportunity hitherto unparalleled. To the degree, the intellectual world of today is open to the totality of human experience, the more the significance of the Judaeo-Christian tradition can be appreciated. With the momentous expansion of human experience and knowledge, the Gospel can address the fullness of human reality as never before, and be recognised in its positive implications.

If such a hopeful analysis of modernity is correct, the great vision of Vatican II, expressed in ‘The Pastoral Constitution on the Church in the Modern World’ (Gaudium et Spes) will be realised. Catholic conversion opens into a catholicity of undreamt-of proportions.

To find out more about the author – click here

Training the next crop of young evangelisers

Youth Minister, Chiara Catanzariti with retreat participants More than 300 Year Six students have delved into a backpack of items to learn about Jesus. Participating ... Read More