Twenty killed in explosions during Mass in Philippines cathedral 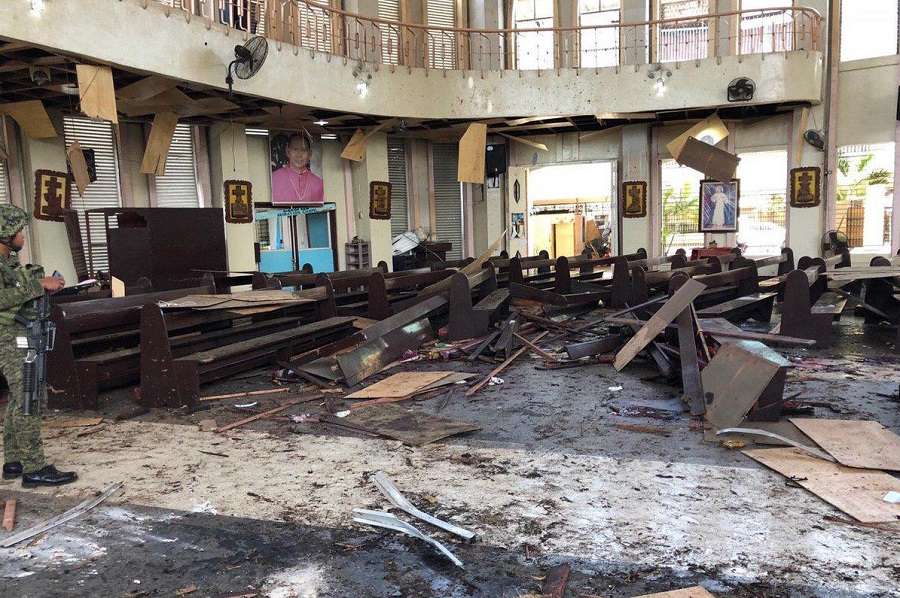 Cathedral of Our Lady of Mount Carmel in Jolo Philippines. Courtesy Armed Forces of the Philippines, Western Mindanao Command.

JOLO, PHILIPPINES: At least 20 people were killed and 111 wounded after two bombs exploded minutes apart during Sunday Mass in a Catholic cathedral on the southern Philippine island of Jolo.

After the initial blast inside the Cathedral of Our Lady of Mount Carmel Jan. 27, which destroyed the wooden pews and glass windows, Mass-goers were rushing to get outside when a second bomb detonated near the cathedral’s entrance, the Associated Press reported.

Police and army troops stationed outside the cathedral were also caught in the second blast when trying to enter the cathedral.

According to police, at least 15 civilians and 5 soldiers were killed in the explosions. Among the wounded there were at least 90 civilians, 17 soldiers, two police officers, and two coast guards. No one has yet claimed responsibility for the attack.

The Philippines bishops’ conference condemned the attack as an “act of terrorism.”

“We condole with the families of the several soldiers and civilians who were killed by the explosions. We also express our sympathies with those who were wounded and extend our solidarity with the rest of the church-goers inside the Cathedral and the rest of the church community in the Apostolic Vicariate of Jolo,” they said Jan. 27.

The bishops also noted the recent creation of the Bangsamoro Autonomous Region in Muslim Mindanao (BARRM), which was created with the hope of ending a nearly five-decade long separtist rebellion in the southern Philppines.

The new autonomous region was endorsed by most Muslims in the majority Catholic nation, though it was rejected by Muslim voters in the Sulu province, where Jolo is located.

“As we begin a new phase in the peace process … we ask our Christian brethren to join hands with all peace-loving Muslim and Indigenous People communities in the advocacy against violent extremism,” the bishops said.

The country’s defense secretary, Delfin Lorenzana, said in a statement Sunday that he has directed troops “to heighten their alert level, secure all places of worships and public places at once, and initiate pro-active security measures to thwart hostile plans.”

There has long been a presence of Muslim Abu Sayyaf militants on Jolo island. The group is defined as a terrorist organization by the United States and the Philippines due to years of kidnappings, beheadings, and bombings.

A statement from the office of Philippines President Rodrigo Duterte Jan. 27 said, “We will pursue to the ends of the earth the ruthless perpetrators behind this dastardly crime until every killer is brought to justice and put behind bars. The law will give them no mercy.”

Staff, students and some of the many contributors who made the new Multisport Court at St Mary's, Crookwell a reality. Photo Chris Gordon. For some ... Read More