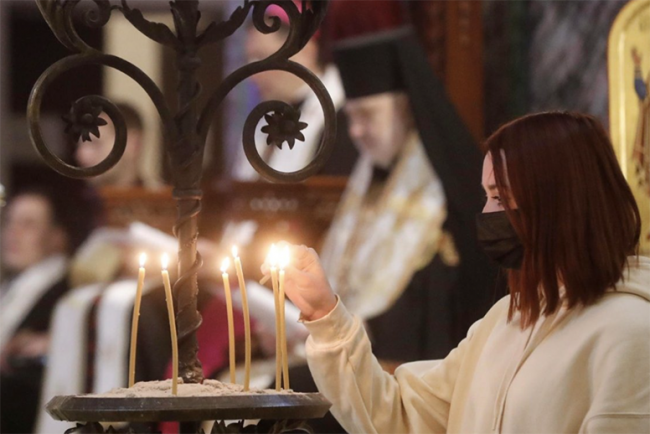 A Ukrainian woman lights a candle at St. Alexander Church in Kiev at a prayer vigil (ANSA)

The Basilica of St. Mary in Trastevere, not far from the Vatican, played host to a special prayer vigil on Wednesday evening, which saw Catholics gather to pray for peace in Ukraine.

The event came in response to Pope Francis’ request for a day of prayer for peace in the Eastern European nation, so that fraternity might overcome the threat of renewed war.

Archbishop Paul Richard Gallagher presided over the celebration, as diplomats from four European nations met separately in Paris to discuss the crisis.

Russia has amassed over 100,000 troops near its border with Ukraine and held live-fire exercises, leading to fears of a full-blown invasion.

“May the winds of war be silenced,” urged Archbishop Gallagher at the prayer vigil. “May the wounds of men, women, and children be preserved from the horrors of conflict.”

He expressed the solidarity of all the Catholic faithful with the people of Ukraine as they face the spectre of war.

The Vatican’s Secretary for Relations with States highlighted the disparity between those who threaten war and those who become its victims.

“These are painful situations that deprive so many men of even the most fundamental rights,” he said. But even more scandalous, he added, “is to see that those who suffer most from conflicts are not those who decide whether or not to start them, but are above all those who are only helpless victims of them.”

The Archbishop lamented the pain endured by entire nations as a result of “carefully calculated actions carried out in a systemic manner,” rather than by natural disasters or events beyond human control.

He recalled that all humanity is called to promote peace, since God has made us all brothers and sisters in Christ.

Archbishop Gallagher said Christians must recognize our links to both those who cause war and those who endure its consequences. So, he added, we must present all parties to God the Father, and invoke upon all the Lord’s gift of peace.

The needs of families who choose a Catholic school in the Archdiocese of Canberra and Goulburn have been recognised by changes to school funding announced ... Read More