Spiritual dynamism to be central to reforms, says Vatican

While most parishes should be led by priests, laity must also lead in the mission of evangelisation says a new document issued by the Vatican’s Congregation for Clergy on pastoral care.

The 22-page instruction, titled The pastoral conversion of the parish community in the service of the evangelizing mission of the church, was released by the Vatican on 20 July.

It specifies the role of lay men and women in the Church’s mission of evangelisation and offers guidance in parish reforms and restructuring.

It also clarifies the role of the deacons, consecrated men and women, as well as the laity, in dioceses where there is a shortage or lack of priests. Lay people are called to make a generous commitment to evangelising, first and foremost, through the “general witness of their daily lives”.

Parishes must “exude that spiritual dynamic of evangelisation” or risk becoming “self-referential and fossilised, offering experiences that are devoid of evangelical flavour and missionary drive, of interest only to small groups”.

PARISHES MUST “EXUDE THAT SPIRITUAL DYNAMIC OF EVANGELISATION” OR RISK BECOMING “SELF-REFERENTIAL AND FOSSILISED.

Monsignor Andrea Ripa, undersecretary of the Congregation for Clergy, said the instruction aims at guiding bishops and dioceses in parish reforms and diocesan restructuring.

“Given that the church is mandated by Christ to be missionary, evangelising and outward-looking, a reform of her structures is continuously required in order to respond to the challenges of the day,” the monsignor wrote.

However, “dropping plans upon the people of God from above, without their involvement, should be avoided,” he said.

Daniel Ang, the director of the Sydney Centre for Evangelisation welcomed the Instruction. “It recognises the fundamental role of the parish in the lives of Christians, as a ‘house among houses’ and provides much encouragement to our future in Sydney in which mission must be the guiding principal of renewal,” he said. 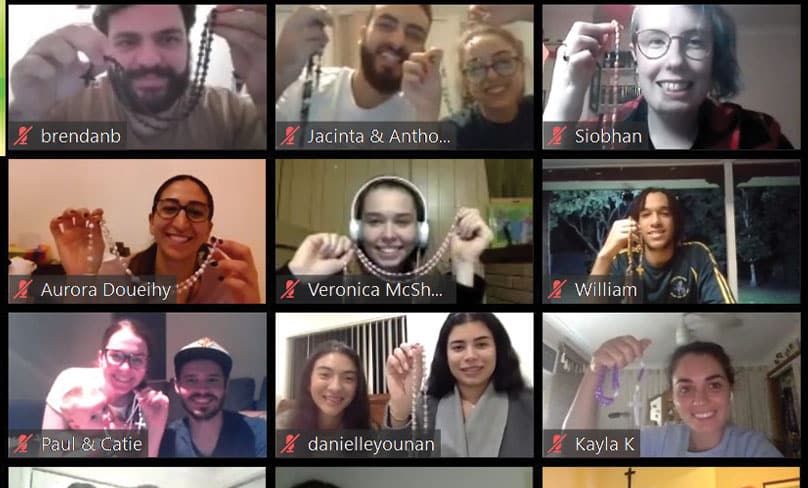 “The document encourages parishes to be always ‘going forth’ rather than ‘preserving a nostalgia of former times’.”

“With conviction it notes ‘any conversion of structures, which the Church must undertake, requires a significant change in mentality and an interior renewal, especially among those entrusted with the responsibility of pastoral leadership’ (#35).

An online zoom rosary prayed by 40 young people from parishes in WA and NSW including St Felix Bankstown, on 15 April.

“In this way the Instruction underscores any structural renewal within our dioceses must be underpinned and at the service of spiritual renewal, to render our parishes ever more conducive to the encounter with Christ that it serves and makes present.”

The document states that where a lay person is entrusted with a share in the exercise of the pastoral care of the community, the person “will be directed by a priest with legitimate faculties, who will act as a ‘moderator of pastoral care,’ with the powers and functions of a parish priest, albeit without an office with its duties and rights.

The document also instructs bishops to not designate deacons, consecrated and lay men and women who are given responsibilities in a priestless parish as “pastor, co-pastor, chaplain, moderator, coordinator, parish manager,” which are typically reserved for priests “as they have a direct correlation to the ministerial profile of priests.”

Instead, those with responsibilities should be designated as “deacon cooperator, coordinator, pastoral cooperator or pastoral associate or assistant,” it said.

Pastoral letter calls for an ‘economy of inclusion’

Australia’s Catholic bishops have released an annual pastoral letter calling for renewed efforts to create an economy of inclusion for all workers. Read More