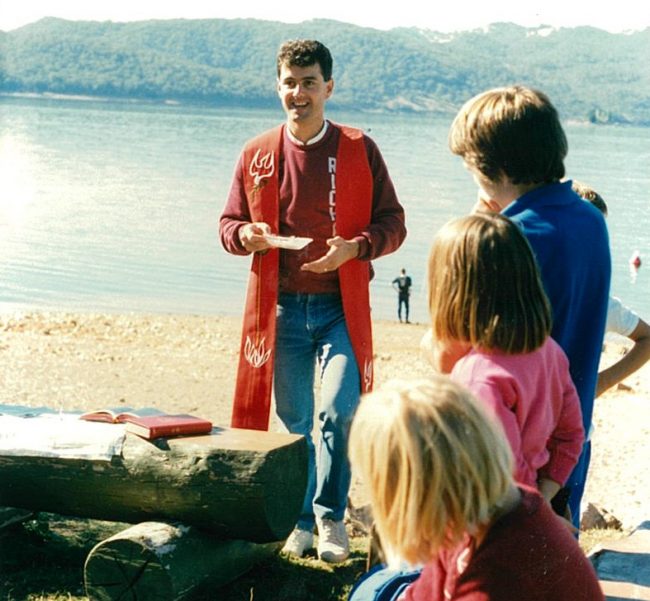 Fr Richard in 1986 in his first year of priesthood with the St Mary’s Parish Young, Youth Group (Antioch).

Being a country boy and growing up on a farm near Stockinbingal, Richard Thompson could not have imagined the world on water that awaited him.

The avid waterskiier and former navy chaplain recently celebrated 35 years in the priesthood.

“It’s not the journey I expected because when I was first ordained I do not think I had a realistic vision of what priesthood is; I had to grow into my priesthood,” said Fr Richard, Parish Priest of Mary Help of Christians at South Woden.

“I have the same personality but my relationship with people and with God is so much different to what it was then because I still had to grow and mature spiritually, emotionally and psychologically.”

Fr Richard was ordained on 15 November 1985 at Temora.

One of his highlights as a priest was his almost 20 years of service in the Royal Australian Navy (RAN) as a chaplain. He retired from the RAN as Senior Chaplain in 2005.

“I loved being a Chaplain in the Navy and I was made for that world at that time,” he said. Fr Richard on the family farm near Stockinbingal.

Fr Richard served in most of the major RAN fleet units as well as Maritime, Training and Systems Commands, including stints with the US Navy, the Royal Canadian Navy and the Royal Navy.

“I would’ve liked to have seen out my last three years in the Navy but the Diocese called me back. I was disappointed at the time but I have moved on.”

His love for the ocean was fostered by trips to the south coast of NSW with his family.

“When we were growing up, we spent our time at Narooma for our holidays, and I still do,” Fr Richard said.

What is not widely known to many is Fr Richard’s love of waterskiing and snow skiing.

“I started waterskiing as a teenager and went with my mates from Temora because they all had boats,” he said.

“I was the one of the youngest out of my friends and I really enjoyed waterskiing and I also loved snow skiing.”

Fr Richard first went to the snow in his mid-teens and that love took him in due course to New Zealand where he briefly taught children how to ski.

“I was already travelling around New Zealand with a mate of mine from Temora and saw an ad to teach snow skiing,” he said. Fr Richard Thompson is the parish priest of Mary Help of Christians at South Woden.

“I didn’t get a wage because my ski pass and accommodation was given to me, but you could do that back then at Mt Hutt before it became a resort.

“It is funny how things turn out, but eventually I also chaired the RAN Snow Sports committee for 14 years.”

Although Fr Richard has waterskied little in recent years, he says that it is the closest he has been to walking on water.

https://youtu.be/z_IMumiAwB4 Breathe in …. Breathe out: On evangelisation and the plenary council of Australia “…Receive the power of the Holy Spirit which will come on ... Read More