Joe and Louise Zavone will be guest speakers at this year’s Marriage as Mission Forum, Sunday June 2 at St Christopher’s Pastoral Centre, Manuka.

The aim of the forum is to encourage ordinary Catholic couples to understand and value the importance of their own marriage in the current cultural and ecclesial context.

Louise Zavone had only just moved to Canberra in June last year when the inaugural Marriage as Mission Sunday was launched in the Archdiocese of Canberra Goulburn.

She moved from Sydney to serve as an Executive Secretary with the Australian Catholic Bishops Conference and to join her husband Joe who had taken the helm as Principal at St Edmund’s College Canberra at the beginning of the year.

Lara Kirk, coordinator of the Marriage as Mission event, remembers her surprise and delight when the Zavone’s turned up, knowing that Louise had only just moved to Canberra.

“It was so encouraging to have them there. It was a real testament to their commitment to Canberra that they’d give up a precious afternoon on the weekend to join other couples who cared about encouraging a vision for marriage in this Archdiocese.

Joe & Louise met as early career teachers when they were teaching at Mount Carmel Catholic High School, in Varroville NSW.  Joe remembers that first awkward conversation starter when he commented on the unusual design of the ‘Swatch’ watch that Louise was wearing at the time. Louise thought it was lovely that someone had noticed but she didn’t realise that it was the beginning of a very special relationship.

They were married in early February, 1996 and they have lived in Bradbury, Camden, Stanmore and Waterloo in NSW until settling in Kingston in 2018.

Joe and Louise have both spent the last three decades in Catholic education.

Louise most recently worked as a Religious Education Officer for Sydney Catholic Schools for almost 10 years and she has served on a number of advisory groups and other organisations, including the Sydney Archdiocesan Justice and Peace Advisory Council.

Recently she has joined the Women’s Interfaith Network Group here in Canberra and is really enjoying getting to know these wonderful women from a variety of faith backgrounds.

Joe loves being involved in the dynamic faith community that is the Catholic school and derives great energy from seeing young people grow and develop in an environment that offers them opportunities for hope, joy and love in their own specific contexts and worlds. Joe has a particular interest in the development of Catholic pedagogy and the influence of charism on the structures and routines of school life.

As speakers at the Marriage as Mission event, Louise & Joe hope to share some of their journey as a married couple, both the highs and the lows.

Marriage & Family Sunday will kick off with an opportunity for couples to renew their marriage vows at the 11am Mass at St Christopher’s Cathedral.

After Mass there will be a light lunch and Marriage Expo, upstairs in the dining area of the St Christopher’s Pastoral Centre so that married couples can socialise and familiarise themselves with the various ministries, groups and movements within the Archdiocese which seek to support marriage.

Then from 1-3pm there will be a Marriage as Mission Forum during which Joe & Louise will speak, a panel of Marriage Formation Groups will answer questions and couples will have a chance to discuss and propose future directions for supporting and promoting the vocation of marriage. 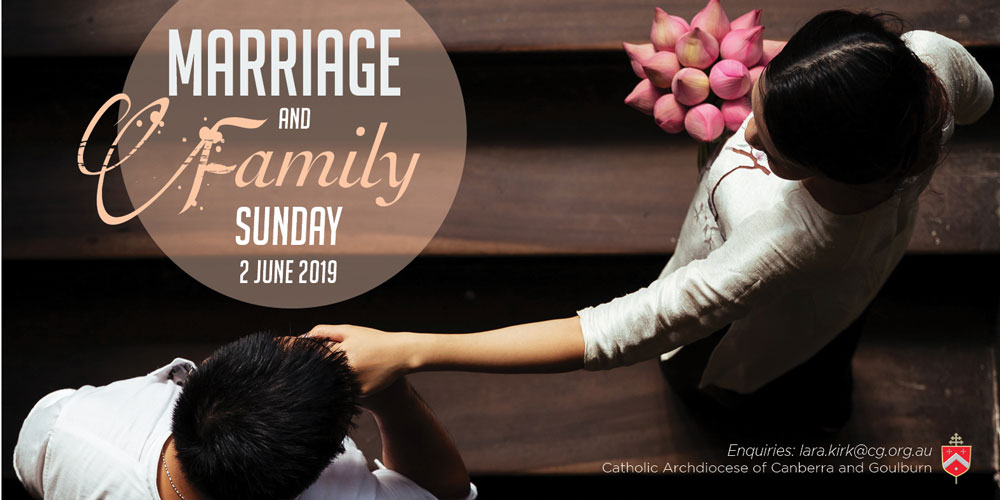