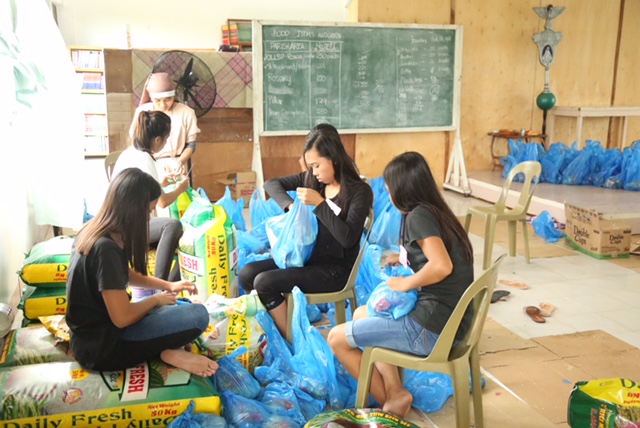 The Caritas international network is on the ground responding with emergency assistance, following the devastating impact of Typhoon Mangkhut, considered the strongest typhoon this year.

It estimated that over 60 people have died so far, with dozens missing, in the typhoon which had sustained winds of 205 kilometres per hour and gusts of up to 255kph. The numbers of fatalities is expected to rise. With power supplies disrupted and challenging communications, the true extent of this humanitarian emergency is only beginning to emerge.

Heavy rains and strong winds rushed through Northern Luzon and parts of Central and Southern Luzon, one of the main islands in the Philippines, further south of Cagayan. Meanwhile, storm surges of up to six metres high hit coastal areas, triggering flash floods and landslides.

Caritas Australia’s Senior Programs Coordinator for Emergencies, Richard Forsythe, said the quick response and long-term disaster preparedness training within the communities has assisted many who were badly impacted by the typhoon.

“The Philippines is a country where many people are Catholic and there is a large church network,” Mr Forsythe said. “Because we are embedded in local churches, part of the social fabric of communities, we are often the first responders, able to provide food, water and shelter to those most in need.” NASSA (Caritas Philippines ) and Caritas Australia’s sister agency in the US, Catholic Relief Services (CRS) are on the ground and part of the large Caritas international network, assessing the situation and helping to deliver essential food, such as canned goods and rice, as well as hygiene kits.

“The trainings and accompaniment that has taken place thanks to support from Australia and our vast international network over the years, has enabled us to be more capably prepared to respond to this latest Typhoon.”

The region of flood-prone rice plains and mountain provinces has a history of deadly landslides. Father Gariguez added in the coming days the priority would be to provide food and hygiene kits to communities impacted, given there had been significant damage to agriculture including rice, corn, vegetable, banana and other crops.

Matt Mc Garry, CRS’s country representative said; “We have stocks of emergency relief materials pre-positioned outside of Manila and have set up a system that allows us to transfer cash to disaster-affected families through private financial service providers in the immediate aftermath of the disaster. “

Meanwhile, there are concerns that the possibility of floods may exacerbate the likelihood of waterborne disease, an eventuality which Caritas staff are also preparing for.

The Caritas network will remain in the Philippines before, during and after the typhoon. Rapid Assessment Teams have been deployed and an operations centre has been established.

Caritas Australia is the lead agency of the CAN DO consortium, (Church Agencies Network Disaster Operations), members of which are currently conducting needs assessments.

Caritas' annual Women for the World luncheon fundraiser at the Royal Canberra Golf Club was well attended my familiar faces to many in the Archdiocese. ... Read More