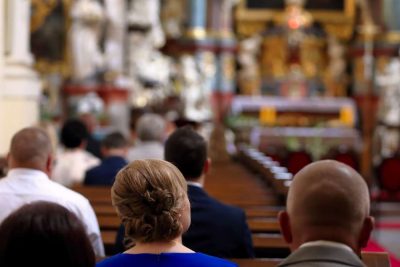 A new analysis from the Pew Research Center shows that many Catholic priests are holding to Pope Francis’ advice to keep their homilies on the shorter side, especially compared to Protestant denominations.

An analysis of nearly 50,000 sermons, given across a variety of Christian denominations during the months of April and May this year, found that the median length of a sermon was 37 minutes, but for Catholic priests, the average length was just 14 minutes.

The analysis was published on Dec. 16, and was titled “The Digital Pulpit: A Nationwide Analysis of Online Sermons.”

While the terms “homily” and “sermon” are often used interchangeably, they are actually different in nature. A “homily” refers to an explanation or further commentary of scripture during a Mass. A sermon is usually defined as a talk on a religious or moral subject, especially one given by a religious leader during a liturgy.

For the purposes of this study, Catholic homilies were counted as “sermons.”

Pew took data from 6,431 different church websites to create the analysis. The churches all posted all or part of their religious services online. For this research, “online sermon” was defined as “a portion of a religious service posted to a church website that contains a commentary from the pulpit but sometimes may include other parts of the service as well.”

The analysis found that while sermons at historically-black and evangelical churches typically contained roughly the same number of words, the sermons at the black churches were longer in length. The study’s authors suggested that this was due to the inclusion of “musical interludes, pauses between sentences or call and response with people in the pews.”

In analyzing the content of the sermons, Pew found that 98% of Catholic homilies included the terms “God” and “Jesus.” The only word that included in 100% of the Catholic sermons examined was “say.”

Each denomination also had words that were distinct to their particular denomination. Among Catholics, the terms “homily,” “diocese,” “Eucharist,” “paschal,” and “parishioner” appeared more often than in any other denomination.

Historically black churches were eight times more likely to hear the phrase “Hallelujah…Come” than any other denomination, though the liturgy, if a denomination uses one, was not examined in this analysis. With the exception of the liturgical season of Lent, the Alleluia is sung at every Catholic Mass prior to the Gospel, but this is not considered to be part of the homily or sermon.

The relatively shorter homilies by Catholic priests are in line with the pope’s own recommendations. In February 2018, Pope Francis addressed priests and other Catholics and discussed the importance of having short, interesting homilies.

“Whoever gives the homily must be conscious that they are not doing their own thing, they are preaching, giving voice to Jesus, preaching the Word of Jesus,” he said on Feb. 7. Homilies “should be well prepared, and they must be brief!”

“How many times have we seen people sleeping during a homily, or chatting among themselves, or outside smoking a cigarette?” he said. When people laughed at the notion, Francis responded, saying “it’s true, you all know it…it’s true!”