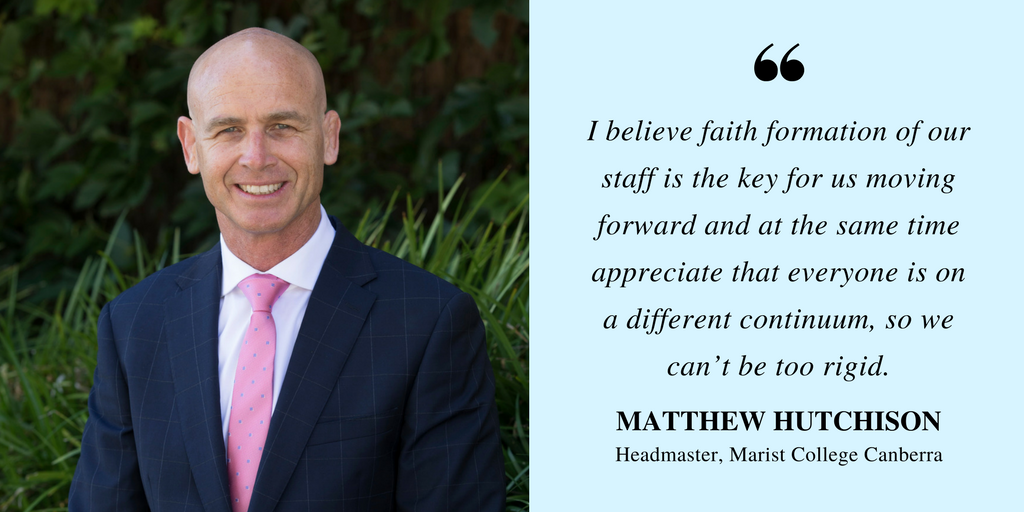 The new Headmaster of Marist Canberra, says his first aim is to ensure that the College continues to put Jesus front and centre.

“I believe we are in a period of uncertainty and disruption in terms of our faith,” he said.

“There can be a real danger that Catholic schools like us, can lose their colour and identity simply by trying to meet the demands of parent expectations based on the narrative of achievement.”

The new mentor recently completed a theology degree and is passionate about Catholic identity in schools.

“I want every student being able to leave Marist Canberra to be open to having a relationship with Jesus,” he said.

“If we don’t succeed in this goal we fail to fulfill our mission.

“Part of our success will be how schools like Marist change the expectations of the people it serves.

“Schools must engage the prevailing secular culture of success while placing more emphasis on the distinct and counter-cultural aspects of the Christian message.

“It is no easy task and requires constant and sustained effort.”

Mr Hutchison says that a great culture already exists at the College, thanks in large to former Headmaster, Richard Sidorko.

Namely, that the school has a wonderful reputation for its work with those on the peripheries of society.

“It’s breadth of co-curricular activities and its academic success is well documented, while discipline and good order are its hallmarks,” he said.

“However, we need to always ask ourselves, what it is that makes us different?

“I believe faith formation of our staff is the key for us moving forward and at the same time appreciate that everyone is on a different continuum, so we can’t be too rigid.”

The new College leader is clear about young guys having an innate yearning for encounter, a searching; and says there is a need for the boys to be challenged in their faith.

“In my experience, religion classes in schools can sometimes be akin to a cocktail party in that they can lack depth,” he said.

“We need to stop giving the boys baby food and start offering them a substantial meal.

“What we have at the moment is a wonderful opportunity to re-contextualise our Catholic identity in schools through provoking and asking the tough questions and permitting them to respond.”

Having been educated at Daramalan College by the Missionaries of the Sacred Heart Fathers, Mr Hutchison’s appointment to Marist is a homecoming of sorts for he and his wife, Anna.

The couple have three adult children.

Mr Hutchison returns to the ACT having held senior leadership positions in both Sydney and Melbourne.

He brings with him a number of charisms from the Jesuits, Christian Brothers and Augustinian schools, where he has previously taught.

Last year, he was the Head of School at St Augustine’s College in Brookvale, Sydney.

It was 12 months ago that he decided to come home to Canberra.

“Once they knew I was coming, the whole Marist family really went out of their way to ensure that I had a good formation in the Marist tradition by way of a pilgrimage and visiting other Marist schools,” he said.

Seeking comments about the Archdiocesan Professional Standards and Safeguarding

In November last year, the Gift of our Children; Professional Standards and Safeguarding page of the Archdiocesan website underwent significant renewal. The new page ... Read More