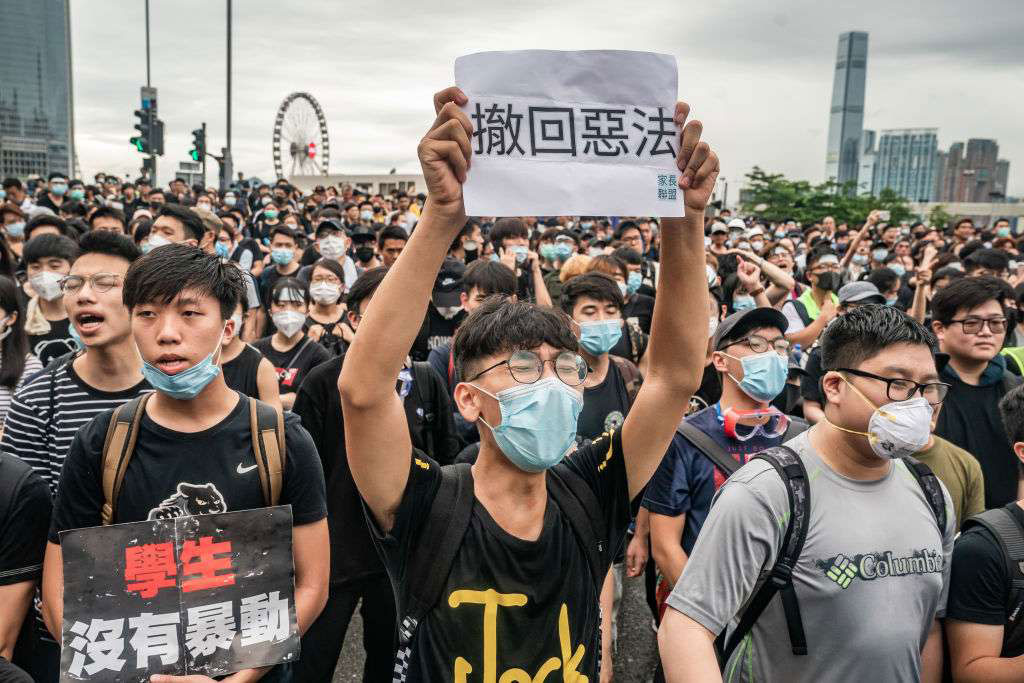 HONG KONG, CHINA: Hundreds of thousands of protesters in Hong Kong are continuing to demonstrate against the government’s plans to allow extraditions to mainland China— a plan which as of Saturday has been indefinitely suspended.

Carrie Lam, Hong Kong’s chief executive, had introduced a bill that would allow for secret arrests and extraditions to mainland China, where Communist courts would try alleged criminals.

The legislation drew widespread protest and was placed on hold, but protests have continued, calling for Lam’s resignation.

Catholic leaders are speaking out in support of the protesters and calling for peace and dialogue.

“They are protesting an issue about an extradition rule promoted by the government,” Cardinal John Tong Hon, Apostolic Administrator of Hong Kong, told Vatican Radio.

“This is our concern too…we ask our Catholics to pray for this situation.”

A group of six religious leaders in Hong Kong have formed a coalition to appeal for an end to violent protests— the largest anti-government demonstrations since 2003— on the island.

The cardinal is part of the inter-religious coalition, which includes leaders of Catholicism, Protestant Christianity, Confucianism, Taoism, Buddhism, and Islam, Vatican Radio reported.

The coalition, on a visit to the Vatican this week, called for the individual rights of the protesters to be respected; distanced themselves from the violent tactics of some; and urged the government and the protesters to sit down together to engage in dialogue.

Cardinal Joseph Zen, bishop emeritus of Hong Kong, held a Mass and prayer service on Sunday to pray for “the future of [Hong Kong].” He also posted a photo to Facebook of himself on stage with several protesters, with the caption “Hong Kong people, come on! Courage and force… Hong Kongers #withdrawextradictionbill.”

In addition, Auxiliary Bishop Joseph Ha Chi-shing of Hong Kong took part in a continuous ecumenical prayer meeting outside the Legislative Council building with thousands of Christians overnight after the latest rally on Sunday, The Union of Catholic Asian News reported.

The issue of extradition has been a contentious one in the region for a number of years, as Hong Kong has no formal extradition deal with Taiwan, Macao and mainland China, potentially creating legal loopholes in some circumstances.

Lam announced June 15 that she was putting the proposed legislation on indefinite hold, and she issued an apology via a government spokesperson. Despite this, protestors showed up June 16 in even greater numbers than the June 9 demonstrations, during which police fired tear gas and rubber bullets at protesters, injuring 72 members of the crowd; 21 police officers were also injured.

Many of the island’s Christians have been involved in the protests. Large groups of protesters have even adopted the hymn “Sing Hallelujah to the Lord” as an unofficial anthem for the movement.

“Regrettably the ‘Extradition Bill’ dispute has now come to a violence and bloodshed stage,” the diocese of Hong Kong said in a June 12 statement.

“Therefore, once more we make an urgent appeal, that the SAR Government and the general public exercise restraint and seek a solution to the current dilemma through peaceful, rational channels.”

The Civil Human Rights Front, a political group that organised the protests, reported that nearly 2 million people had taken to the streets in the most recent protest, held June 16. Police said they counted 338,000 people along the original procession route.

Last week the organisers said a little over 1 million participated, while police put their estimate at 240,000.

As a special administrative region, Hong Kong has a large degree of autonomy from mainland China, with its own political and economic system. The territory was a British colony from 1842 until 1997.

There are some 581,000 Catholics in Hong Kong, or about eight percent of the population.

Hong Kong also has a separate legal system from the mainland. Britain ceded sovereignty of the island to China in 1997; the agreement giving Hong Kong special rights and freedoms under Chinese rule ends in 2047.