A THREE-STAGE plan to reopen churches and allow Masses has been put to the Prime Minister and ACT Chief Minister by Archbishop Christopher Prowse.

People were missing practicing their faith, the Archbishop said, and allowing services would “generate tremendous hope and inner strength”.

Anglican Bishop for Canberra and Goulburn Dr Mark Short and the president of the ACT Churches Council, Rev David Campbell, co-signed the letter to Mr Barr. 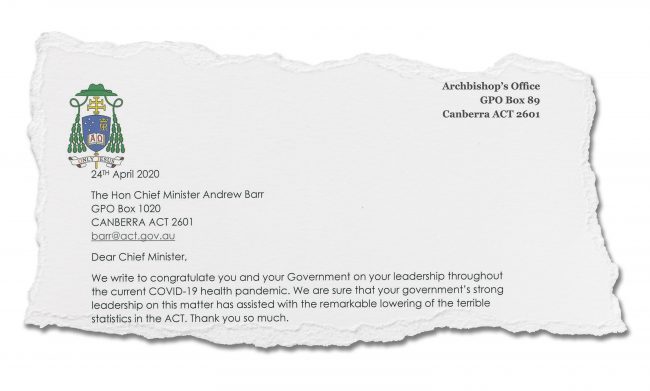 Religious services would be subject to the following conditions:

• Physical distancing, no human contact and place markers for parishioners,

• Hygiene practices entering and leaving the church, and

• Advising elderly people or those with health concerns not to attend.

Archbishop Christopher praised the Prime Minister’s “exemplary leadership” on the pandemic which he said had resulted in Australia’s low infection rates.

“The community now talk of a recovery plan,” the Archbishop wrote.

“I would like to humbly include a phased return to church services.

“People are truly missing the practice of their faith … religious practices generate tremendous hope and inner strength in people.

“These qualities are needed more than ever in Australia where so many people feel fragile, lonely and isolated.”

In the letter to Mr Barr, the three church leaders said they would welcome auditing by government officials and argued the modest recommendations would mean a lot to church goers.

“The health and well-being of so many would be enhanced by these simple signs of real practical hope.”

The Prime Minister has said he could not see large church services being allowed but praying in a place of worship could be possible.

A Choice No Mother Should Have to Make

A women’s advocate who is leading the fight against the NSW abortion laws says there are two victims of every abortion – the unborn children ... Read More