The Scourging at the Pillar

Scripture: Then Pilate took Jesus and scourged him. And the soldiers plaited a crown of thorns, and put it on his head, and arrayed him in a purple robe; they came up to him, saying, “Hail, King of the Jews!” and struck him with their hands. Pilate went out again, and said to them, “See, I am bringing him out to you, that you may know that I find no crime in him.” So Jesus came out, wearing the crown of thorns and the purple robe. Pilate said to them, “Behold the man!” When the chief priests and the officers saw him, they cried out, “Crucify him, crucify him!” Pilate said to them, “Take him yourselves and crucify him, for I find no crime in him.” The Jews answered him, “We have a law, and by that law he ought to die, because he has made himself the Son of God.” (John 19:1-7) 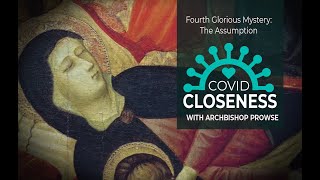 The Assumption https://youtu.be/vBd1HDm0IM4   Dogma of the Assumption: For which reason, after we have poured forth prayers of supplication again and again to God, and have ... Read More