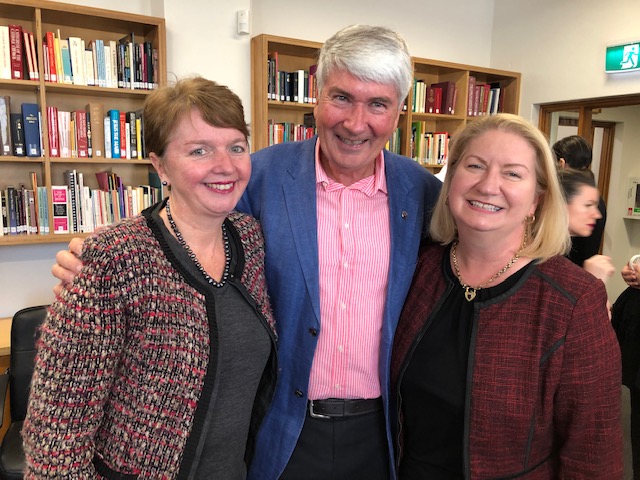 He may be one of Australia’s ‘Living Treasures’, but in some parts of the country, Fr Frank Brennan is a complete unknown.

And that has been a welcome and humbling experience for the Jesuit priest.

“It’s all very well to be a ‘Living National Treasure’,” Fr Frank told an audience recently. “But it brings you back to earth when you turn up at country centres and they say, ‘Who are you? What do you do?’ That has been good for my humility.”

The Australian Catholic Bishops Conference (ACBC) hosted a farewell for Fr Frank in early June, to acknowledge his two and a half years as CEO of Catholic Social Services Australia (CSSA). From next year, he will be Rector at Newman College at the University of Melbourne.

The high-profile scholar and commentator will be much missed across the Archdiocese, where he generously assisted in many parishes, particularly in Curtin and Yarralumla, and was actively involved in a number of groups, including the Jesuit Discussion Group and Concerned Catholics. Among the crowd of more than 50 people at the farewell was friend Andrew Phelan from St Thomas More Parish in Campbell.

“I used to be the Chief Executive and Principal Registrar of the High Court, and I knew Frank’s Dad, Gerard, who was Chief Justice for many years,” Andrew said. “He was a regular visitor after he retired too, giving talks at the Court, and we had a function last year for his 90th birthday.”

“Our lives begin to end the day we become silent about things that matter.” Martin Luther King.

CSSA Board Member Paul vane-Tempest shared with the audience that, when Fr Frank’s appointment was made, he told staff they should think of the in-demand Jesuit as “a trained raptor”.

“He’ll fly off and do lots of wonderful things, but hopefully when you click your fingers he’ll return,” Mr vane-Tempest said.

“When Frank joined us, we knew of his advocacy for disadvantaged people and the Indigenous community, but what we didn’t know or expect was that Frank brings to the role significant managerial and leadership skills.

“He has been of tremendous assistance to the Board in defining and clarifying our role and work, and that has been the overwhelming legacy and contribution Frank has made.

“What was also surprising to me was Frank’s capacity to deal with the organisation’s limited and significantly reduced income. He has been innovative and agile in making that work and developing partnerships to deliver on projects.” Mr vane-Tempest lauded Fr Frank’s advocacy and persuasion skills and shared a Martin Luther King quote that he said was apt for his friend: “Our lives begin to end the day we become silent about things that matter.”

Taking up the raptor theme, Fr Frank told the group that “one of the problems with a raptor is that he is not always at home.”

“And for that reason I have to acknowledge that the staff have been absolutely phenomenal,” he added.

“When I arrived I was not expecting that we would have to scale back as significantly as we did, but we now have the beginnings of better relationships with the ACBC and Catholic Health and other agencies.  It has been such a privilege to move around the country and do formation work about Catholic social teaching with our member organisations.”

Fr Frank revealed his motivation for the role was to better understand the needs of poor and disadvantaged people.

“I had spoken to just about every principal in the country and done a lot in the health sector and parishes, but I felt with the welfare sector I hadn’t made much of an impact,” he said.

“Chris Sidoti (former Human Rights Commissioner) said to me, ‘You deal with Aborigines and refugees and migrants but what about the poor and disadvantaged’.

“Mainstream welfare agencies do a tremendous job but those of us from the major churches provide a faith context which is so very important, and my hope is that ecumenical spirit can be strengthened.”

Fr Frank’s departure marks the end of the Jesuit Community in Canberra, after 51 years. A farewell Mass to acknowledge Fr Frank, and the Jesuits’ contribution, will be held at St Christopher’s Cathedral, Wednesday July 31 (the feast of St Ignatius Loyola) at 5.30pm,. Archbishop Christopher Prowse will celebrate the Mass, with the Jesuit Provincial Fr Brian McCoy SJ. Everyone is welcome, with refreshments to follow.

ACU has commissioned a triptych, the first full-size altar piece created in the Medieval Italian Sienese style in at least 400 years. Read More