Pope Francis: We need unity in the Catholic Church, society, and nations 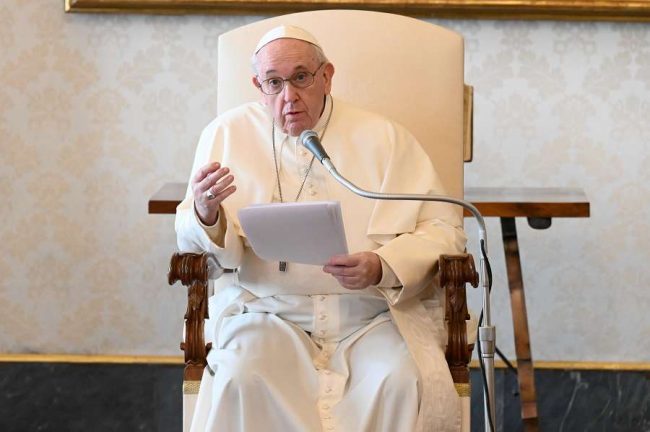 Rome Newsroom, Jan 10, 2021 / 02:30 pm (CNA) – In the face of political discord and self-interest, we have an obligation to promote unity, peace, and the common good in society and in the Catholic Church, Pope Francis said Sunday.

“At this moment, a politician, even a manager, a bishop, a priest, who does not have the ability to say ‘we’ is not up to par. ‘We,’ the common good of all, must prevail. Unity is superior to conflict,” the pope said in an interview that aired on Italian news program Tg5 Jan. 10.

“Conflicts are necessary, but right now they have to go on vacation,” he continued, noting that people have a right to different points of view, and “political struggle is a noble thing,” but “what matters is the intention to help the country grow.”

“If politicians emphasize more self-interest than the common interest, they ruin things,” Francis stated. “The unity of the country, of the Church, and of society must be emphasized.”

The papal interview took place following the storming of the U.S. Capitol Building Jan. 6 by pro-Donald Trump protestors, as Congress was in the process of certifying the presidential election results.

Francis said in a video clip from the interview, released Jan. 9, he was “astonished,” by the news, because the U.S. is “a people so disciplined in democracy, right?”

“Something isn’t working,” Francis continued. With “people taking a path against the community, against democracy, against the common good. Thanks be to God that this has broken out and there was a chance to see it well so that now you can try and heal it.”

In the interview, Pope Francis also commented on the societal tendency to discard anyone who is not “productive” to society, especially the sick, the elderly, and the unborn.

The pope said he asks two things to the person who questions him on abortion: “do I have the right to do this?” and “is it right to cancel a human life to solve a problem, any problem?”

The first question can be answered scientifically, he said, pointing out that by the third or fourth week of gestation, “there are all the organs of the new human being in the womb of the mother, it is a human life.”

Taking a human life is not okay, he said. “Is it okay to hire a hitman to solve a problem? One that kills human life?”

He also spoke about the discarding of migrants: “the people who drowned in the Mediterranean because they were not allowed to come, [this] weighs heavily on our conscience… How to deal with [immigration] later, that is another problem that states must approach cautiously and wisely, but letting [migrants] drown in order to solve a problem later is wrong. Nobody does it with intention, it is true, but if you don’t put in the means of help it is a problem. There is no intention but there is intention,” he said.

Encouraging people to avoid selfishness in general, Pope Francis recalled several grave issues affecting the world today, especially war and the lack of education and food for children, which have continued throughout the COVID-19 pandemic.

“They are serious problems and these are just two of the problems: children and wars,” he said. “We must become aware of this tragedy of the world, it’s not all a party. To get out of this crisis head on and in a better way, we must be realistic.”

Asked about how his own life has changed during the coronavirus pandemic, Pope Francis admitted that at first, he felt like he was “caged.”

“But then I calmed down, I took life as it comes. Praying more, speaking more, using the phone more, taking some meetings to solve problems,” he explained.

Papal trips to Papua New Guinea and Indonesia were canceled in 2020. In March this year, Pope Francis is scheduled to travel to Iraq. He said, “now I don’t know if the next trip to Iraq will take place, but life has changed. Yes, life has changed. Closed. But the Lord always helps us all.”

The Vatican will begin administering the COVID-19 vaccine to its residents and employees next week, and Pope Francis said he has “booked” his appointment to receive it.

“I believe that, ethically, everyone has to get the vaccine. It is an ethical option because it concerns your life but also that of others,” he stated.

Recalling the introduction of the polio vaccine and other common childhood immunizations, he said, “I don’t understand why some say this could be a dangerous vaccine. If doctors present it to you as something that can be fine and has no special dangers, why not take it?”

A statue of an angel at St. John the Evangelist Parish Cemetery in Riverhead, N.Y. All Souls' Day, the commemoration of all the faithful departed, ... Read More