EDUCATION, a change in lifestyles and a model of development focused “on fraternity and on the covenant between human beings and the natural environment” are urgently needed to slow climate change and care for its victims, Pope Francis said in a message to world leaders at the COP26 summit.

Cardinal Pietro Parolin, Holy See secretary of state and head of the Holy See delegation to the UN climate conference in Glasgow, Scotland, has read portions of the Pope’s message to the assembly.

The cardinal was one of more than 50 speakers, most of whom were heads of state or government leaders, delivering three-minute “national statements” during the high-level segment of the Conference of the Parties to the United Nations Framework Convention on Climate Change.

The Holy See released the full text of the Pope’s message, which was submitted as part of the official record of the summit.

Like other leaders who spoke of the concrete commitments their governments were making, Pope Francis briefly explained the action the Holy See had adopted; the first is to achieve net-zero carbon emissions by 2050.

But the Holy See, with its influence over parishes, schools and universities around the globe, also is committed, he said, to promoting “education in integral ecology,” meaning a focus on both the needs of the earth and on the needs of the people who inhabit it.

“These commitments have given rise to thousands of initiatives worldwide,” the Pope wrote.

The “vital task” of the Glasgow meeting, he said, is to show the world that “there really exists a political will to devote – with honesty, responsibility and courage – greater human, financial and technological resources to mitigating the negative effects of climate change and assisting the poorer and more vulnerable nations most affected by it.” 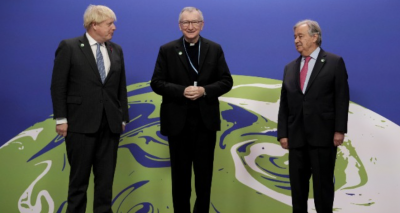 The wealthier nations must lead the way, he said, not just because they have the resources, but also because they owe an “ecological debt” to the poorer countries whose resources they have long exploited.

“The wounds inflicted on our human family by the COVID-19 pandemic and the phenomenon of climate change are comparable to those resulting from a global conflict,” Pope Francis said.

“Today, as in the aftermath of the Second World War, the international community as a whole needs to set as a priority the implementation of collegial, solidary and farsighted actions.”

The pope assured the world leaders that the majority of their people, no matter their religious belief, see protecting the environment as a moral and spiritual issue that must be faced.

At a meeting at the Vatican in early October, he said, “we listened to the voices of representatives of many faiths and spiritual traditions, many cultures and scientific fields.”

But, he wrote, there was “a remarkable convergence on the urgent need for a change of direction, a decisive resolve to pass from the ‘throwaway culture’ prevalent in our societies to a ‘culture of care’ for our common home and its inhabitants, now and in the future.”

Special attention must be paid to the impact climate-change mitigation efforts will have on the labour market and on the world’s poorest people, he said.

“Sadly, we must acknowledge how far we remain from achieving the goals set for tackling climate change,” he said. “We need to be honest: This cannot continue.”

“Now is the time to act, urgently, courageously and responsibly,” he told the leaders.

“The young, who in recent years have strongly urged us to act, will only inherit the planet we choose to leave to them, based on the concrete choices we make today.”

NEWER POSTHayden Ramsay: Work at home: a whole new set of unknowns
OLDER POSTRemembering all souls for All Souls