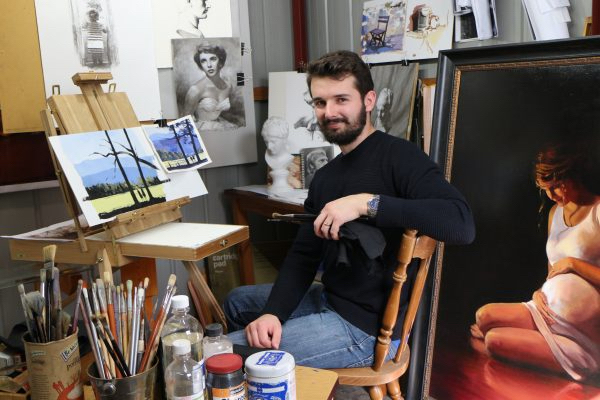 Daniel in his studio

It’s an unlikely combination but a project engineer and a Canberra Braves ice hockey player have joined forces in the Year of St Joseph to produce a new painting of the great saint.

Engineer Daniel De Valentin is a talented local artist whose works have hung in the National Portrait Gallery, the Australian National University and in private collections.

This year he was commissioned by archdiocesan Vicar-General Fr Tony Percy to produce a painting of St Joseph for his parish church at St Anthony’s, Wanniassa.

The two began by discussing concepts involving a younger St Joseph instead of the older versions commonly portrayed.

Further inspiration came from one of Daniel’s friends who suggested a more hands-on St Joseph, positioning him alongside Jesus teaching him a specific skill. This would be different from classic scenes where both are pictured working separately.

“For my painting it, therefore, became St Joseph guiding the hand of Jesus to hammer a nail into wood,” Daniel said. “It’s something very ordinary we could imagine our fathers teaching us. But takes on a new meaning when you consider that Jesus is God.

“The hammering of a nail into wood also of course has resonance with Jesus’s later crucifixion.

“It adds another layer to the painting that’s quite special.”

The project took about six months from concept discussions, to sketches, to photography, to black and white colourings, to the finished work.

Daniel worked from photographs of a carpentry set in his garage which is where the Canberra Braves ice hockey player Michael Giorgi entered the picture.

Michael was the model for St Joseph in the photographs and he was joined by Ben Jeffery who modelled the child Jesus.

Daniel’s wife Ruth (costume design) and brother Nathan (photography) were other key members of the team.

The finished painting will now be framed and varnished before finding its home at St Anthony’s. Students lose their locks for the Leukaemia Foundation

NEWER POSTQ#1 What is the Plenary all about?
OLDER POSTA Gift Of God – The 5th Plenary Council of Australia