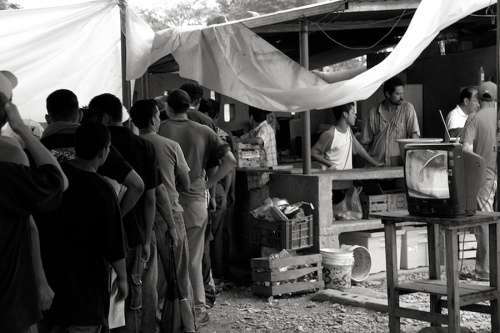 TIJUANA, MEXICO: Archbishop Francisco Moreno Barrón of Tijuana encouraged the faithful Sunday to share “from our poverty” with the Central American migrants arriving in the city.

In his Nov. 25 homily, Archbishop Moreno encouraged sharing “not out of what we have left over but from our poverty. Let us continue to show that solidarity of our peoples.”

Thousands of Central American migrants have reached Tijuana in their attempt to cross the border to the United States. The first migrant caravan, which left Honduras Oct. 13, numbers more than 5,600 people.

Archbishop Moreno said the large number of migrants “took us by surprise” since “we don’t have the conditions to receive them as we have done on other occasions.”

The Archbishop of Tijuana asked Mexican federal authorities to allocate resources to the area “so that we can attend to this extraordinary human emergency,” as well as “international aid, particularly from those humanitarian agencies who always are on scene in these particularly difficult moments.”

The prelate asked the United States to “take the initiative to invest” in Central American countries “so that in the future these disorganized human exoduses that cause so much suffering will not continue.”

Meanwhile, he said, “we as people of faith, only want to recognize the face of Jesus, a migrant face, and give these brothers an response of love.”

“We have a migrant face, we are a migrant Church, a border, a migrant Tijuana and that is why we are more sensitive to giving a hand to these brothers,” he said.

Source: This article was originally published by, ACI Prensa. It has been translated and adapted by CNA.

We make the journey into 2019 with faith, hope, and love. May we not allow the darkness of despair and selfishness to cloud our vision ... Read More