A sweet and sour farewell for Suzanne 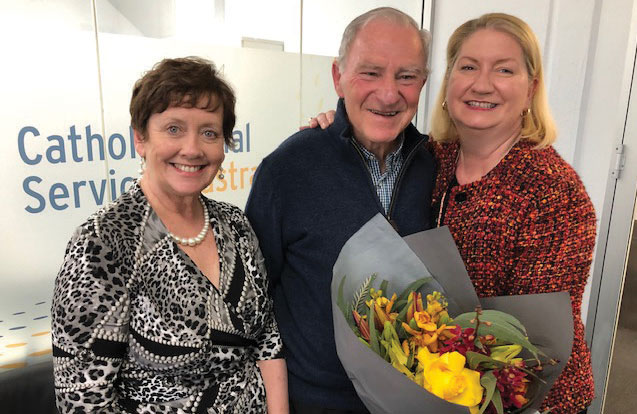 OUTGOING Catholic Health Australia head Suzanne Greenwood has been praised for her warmth and intellect at a farewell event last month.

After almost five years at the helm, Ms Greenwood will be­come Executive Director at the Pharmacy Guild of Australia.

“Suzanne and I moved to Canberra at the same time, at the start of 2014, and I remember swapping notes about proper­ties to rent and schools for our kids,” said Alison Burt, executive secretary of the Bishops Com­mittee for Social Justice, Mission and Service.

“There has always been such a warmth and approachability about Suzanne, and a real inter­est in people.”

Alison said that Suzanne had completed her MBA during her time at Catholic Health Aus­tralia, to which Suzanne added that she had also met the Pope, which was a real highlight.

The farewell function was also a welcome for the new Executive Director of Catholic Social Services Australia (CSSA), Ursula Stephens.

Ursula, who replaced Fr Frank Brennan and started on July 1, joked that she had barely time to collaborate with Suzanne before she announced her departure.

Bishop Paul Bird, CSsR, the Bishops’ delegate to CSSA, said in a statement that it was a bless­ing to have Ursula in the role, given her early career in sup­porting education in Indigenous communities and her latter years as a Senator.

“Just reading the headings of her achievements left me somewhat out of breath,” Bishop Bird wrote. “It is great that Ursula has brought so much energy to so many fine projects. She has shown particular dedica­tion to promoting opportunities to people who would otherwise miss out, such as with music education.”

Ursula said she looked forward to forging closer ties with Catholic Health Australia and Catholic Education “par­ticularly given the challenges that the Catholic Church, and by association its agencies, are facing.”

Bishop Vincent Long, OFMConv; said in a statement that Suzanne Greenwood was a committed Catholic “who has positioned CHA as a strong advocate for the dignity of every human person and a credible voice of the Church in the public domain.”

“It is a sweet and sour feeling to be moving on,” Suzanne said. “I have loved interacting with people; having a Board meeting at a hospital and getting to walk the floors and talk to the nurse unit manager in the Emergency Department. For us it is very much the healing hands of Jesus that are over everything we are protecting.”

On the evening of Sunday June 9, churches in the inner north held an Ecumenical Taizė Prayer Service. Read More