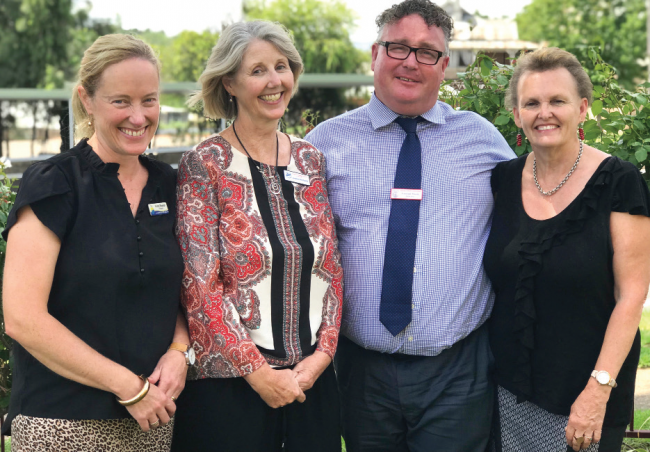 They call themselves the “Teabag Cluster” but it has nothing to do with a kettle.

“It’s an acronym for the first letters of the towns where are schools are,” new McAuley Catholic Central School principal Eamonn Moore said.

“Teabag meaning T for Tumut, A for Adelong, B for Batlow and G for Gundagai”.

So they have a lot to talk about, sharing information and looking for new opportunities for their students.  Plus offering support.

“Life as a principal can be lonely sometimes so it’s good to call someone and say you’ve had a crappy day,” Eamonn said.

There is respect too.

“Eamonn received an enrolment inquiry from a Gundagai family so he encouraged them to come to me and passed on their details,” St Patrick’s Gundagai principal Christine Baron said.

The school leaders agree there is something special about country kids.

“There is a lovely honesty and joy about them, a real openness,” said Kirsty Beaven from St Joseph’s Adelong.

“They’ll tell you about their weekend and how they went fishing and shooting rabbits and dug fence holes with Dad.  In Canberra they go to the Mall.”