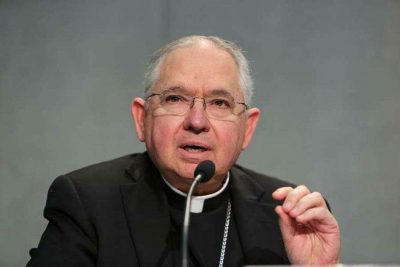 Washington D.C., Jan 8, 2020 / 02:30 pm (CNA) – Archbishop Jose Gomez, president of the United States Conference of Catholic Bishops, has urged Catholics to pray for peace during amid rising conflict between the United States and Iran.

Gomez released the statement on Tuesday evening, after Iranian forces fired missiles at an American military base in Iraq in response to the killing of Iranian General Qassam Soleimani last week.

“We must pray urgently that our world’s leaders will pursue dialogue and seek peace,” said Gomez.

“Please join me in asking our Blessed Mother Mary, the Queen of Peace, to intercede, that Jesus Christ might strengthen the peacemakers, comfort the suffering, and protect the innocent and all those in harm’s way, especially the men and women in our military and diplomatic service,” he added.

On Wednesday, President Donald Trump addressed the press shortly before noon, and stated that the United States would not be escalating the situation further, and that “Iran appears to be standing down, which is a good thing for all parties concerned and a very good thing for the world.”

The president said that had been no casualties from the missile strike on Tuesday, and that there was “only minimal damage” to the base.

Trump defended the airstrike that killed Soleimani, saying “Soleimani’s hands were drenched in both American and Iranian blood” and that “he should have been terminated long ago.”

“By removing Soleimani, we have sent a powerful message to terrorists: If you value your own life, you will not threaten the lives of our people,” said Trump.

The president urged NATO to become deeper involved in the peace process in the Middle East, and said that America would impose further economic sanctions on Iran. These sanctions would continue until Iran makes changes.

As of Wednesday, there was no plan for a military invasion of Iran.

“The fact that we have this great military and equipment, however, does not mean we have to use it,” said Trump. “We do not want to use it.  American strength, both military and economic, is the best deterrent.”

Trump ended his address with a message to the Iranian people and their leaders, saying that America wants the country to “have a future and a great future–one that you deserve, one of prosperity at home, and harmony with the nations of the world.”

“The United States is ready to embrace peace with all who seek it,” he said.

In a national first, Merici College teamed with Jasiri Australia on Wednesday, September 5 to become the first school in Australia to train all of ... Read More