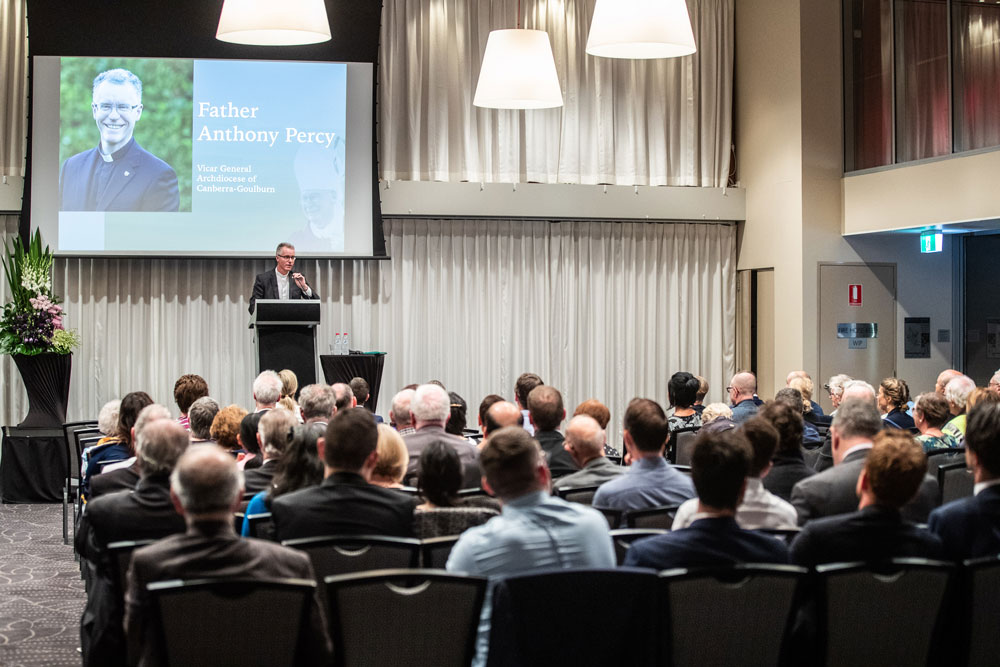 The following reflection on the Bishop Manning lecture delivered by Vicar General, Fr Tony Percy is being reproduced with the kind permission of the Catholic Weekly.

The clergy sexual abuse crisis has been a “hell of a mess” and the answer lies in moving forward with faith, transparency and creativity, according to Father Tony Percy.

The academic, author and vicar general of the Archdiocese of Canberra-Goulburn used his speech at the annual Bishop Manning Lecture on 21 March to make a call for the Church to “find its voice” at the national and local levels—which must include men’s and women’s voices.

During his speech at the Kirribilli Club in North Sydney, which was hosted by the Catholic Commission for Employment Relations, Father Percy addressed the topic ‘The Catholic Community in the 21st Century’, and responded to the questions ‘Where have we been?’ ‘Where are we now?’ ‘Where are we going?’ and ‘Who’s going with us?’.

He drew upon the work of “the most truly modern pope” Pope Leo XIII, Scripture, Census data and insights from prominent Catholics, including Hildegard of Bingen and Pope Francis to suggest ways the Australian Church could make use of three pillars research shows are needed for church renewal: community, teaching and preaching, and music.

But first it must be acknowledged that the Church has lost people’s trust and that “trust is everything”, he said.

“The rebuild will take grace and courage. The abuse of children, youth, and the vulnerable by clergy is ‘everything we don’t believe in’. Precisely because we believe human sexuality to be symbolic of love and life we sense the ‘gravity of the depravity’.

“The price exacted has been enormous. Victims and survivors have very, very deep wounds – wounds that perhaps only our Divine Physician can heal. The fallout has been immense for our community.”

The roots of the problem lie in narcissism, an entitlement mentality and clericalism, he believes, including an “overplay of the clergy” and an “underplay of the laity”.

The answer lies in faith and reason, the “two lights in which we see what God is asking of us”.

What is needed is a focus on community, “robust and transparent” governance, and mutuality, Father Percy said, which is a theme strong in the writings of St Paul and in the Gospel of Luke and is founded on the complementarity of clergy and laity, men and women.

The faithful must also draw upon the Word of God, from silence and music, and from creative forms of philosophy and theology such as St John Paul II’s Theology of the Body, he said. Parishes would do well to make use of current low interest rates to upgrade their music ministries, while there is a need for a “preaching institute that is fit for purpose” for clergy and laity.

Answering questions at the conclusion of his speech about the way forward for the Church he added that any response to the clergy sex abuse crisis must begin with an acknowledgement that “it’s been a hell of a mess”.

“But we have got to move forward with a sense of faith and with seeking of forgiveness,” he said.

“If nothing changes, if it hasn’t affected us deeply, we will go nowhere.”

The Bishop Manning Lecture is a leading Church forum hosted in honour of the pastoral and social justice achievements of Bishop Emeritus of Parramatta Kevin Manning.

AUDIO: Archbishop Christopher Prowse has recently returned from the Panama World Youth Day along with the other pilgrims from this Archdiocese and described it as ... Read More