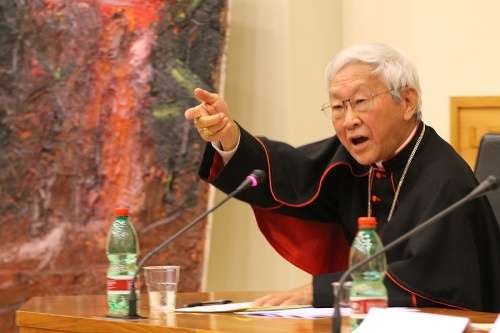 Washington D.C., Feb 11, 2020 / 05:30 pm (CNA) – Cardinal Joseph Zen, the archbishop emeritus of Hong Kong, has said that the situation of the Church in China is dire. The cardinal also predicted the end of the underground Church.

“The situation is very bad. And the source is not the pope. The pope doesn’t know much about China,” Cardinal Zen told CNA on Tuesday

“The Holy Father Francis shows special affection to me,” Zen said, but added that he is in confrontation with Cardinal Pietro Parolin, the Vatican’s Secretary of State.

“I’m fighting Parolin. Because the bad things come from him,” Zen added.

Parolin, Cardinal Zen said, is “so optimistic about the so-called ‘Ostpolitik’, the compromise.”

But, the cardinal told CNA, “you cannot compromise” with the Chinese Communist Party, whom he called “persecutors” of the faith.

Cardinal Zen spoke to CNA Feb. 11 while in Washington, DC, to meet with members of Congress at the office of U.S. Congressman Chris Smith (R-N.J.).

After the meeting, Smith told CNA that Cardinal Zen “is a Saint Paul of our time, who is not only a holy and an effective witness for the Gospel of Jesus Christ, he is also a man of great truth about what is really happening in China.”

During the meeting, the cardinal and the members of Congress talked about China’s “Sinicization” programme of religious practice in the country and the Communist government’s years-long effort to forcibly bring religion under its control.

Some celebrations of Christmas have been banned in China, Bibles have been rewritten by order of regional authorities, and vocations are reportedly down, Zen told the lawmakers.

“I think it’s had a paralyzing effect on the Catholic Church,” Smith said.

In 2018, the Holy See and China reached an agreement on the ordination of bishops in Chinese dioceses, giving the Communist regime a voice in the selection and vetting of episcopal candidates. That agreement was supposed to unify the Church in China by bringing the state-sanctioned Chinese Catholic Patriotic Association into communion with the Holy See and unifying it with the underground Church loyal to Rome.

Critics of the deal, including Zen, warned that the underground Church would not be sufficiently protected from the Chinese government’s efforts to impose its ideology into all religions in the country, including Catholicism.

A report by the Congressional China Commission, issued in January, noted that human rights abuses intensified in China during the 2019 reporting year, and the persecution of Catholics worsened after the Vatican-China deal was reached.

“More and more, the Church [is] under persecution,” Zen said on Tuesday, “both the official Church, and the underground.”

The underground Church, he said, “is doomed to disappear,” as older bishops loyal to the faith are dying and no new bishops are being appointed – meaning no new priests can be ordained.

Zen said that Chinese Catholics come to Hong Kong from the mainland and him ask what he can do for the Church in China. “I can do nothing. I have no voice in the Vatican. Simply not,” he told CNA.

“And so the situation is, humanly speaking, hopeless, for the Catholic Church,” Zen added.

Zen is the bishop emeritus of the Diocese of Hong Kong, the special administrative region has seen nearly a year of pro-democracy protests, beginning with opposition a bill to allow for the extradition of individuals from Hong Kong to mainland China. The protests have also focused on protecting Hong Kong’s special status against perceived increasing influence and control by the mainland Chinese government. The extradition bill was eventually pulled from consideration.

Recently, CNA reported that a candidate for the next bishop of Hong Kong had been settled upon by the Vatican, but that the announcement was delayed because the candidate would be seen as too sympathetic with the mainland Chinese government. Fr. Peter Choy Wai-man was reportedly picked to succeed Bishop Michael Yeung Ming-cheung, who died unexpectedly in January of 2019.

Since that time, the diocese has been administered by Cardinal Zen’s immediate successor, Cardinal John Tong Hon, who retired in 2017. CNA also reported that the Vatican’s first choice as the new bishop of Hong Kong, current auxiliary of the diocese Bishop Joseph Ha Chi-shing, had his appointment dropped before being announced after he was pictured taking part in street protests against the government.