Archbishop Mark Coleridge says Pope Francis’ apostolic exhortation Querida Amazonia (Beloved Amazonia) is not just for a distant and alien part of the world, but has much to offer the Catholic Church in Australia.

“The Amazon is remote from us but the issues are not,” the president of the Australian Catholic Bishops Conference said.

The document, which follows last year’s Synod of Bishops on the Amazon, was released tonight.

“All papal documents are highly anticipated, but this one holds a special interest not just for the peoples of Amazonia with all their needs, but for the Church around the world,” said Archbishop Coleridge.

He said two critical issues addressed during the Synod and in the Pope’s exhortation – indigenous culture and an integral understanding of ecology – must be front and centre in the Australian context as well.

“The Amazon has a unique place in the planet’s ecological footprint and its abuse in various forms is having and will continue to have an impact on the connection between humanity and the planet, our common home,” Archbishop Coleridge explained.

“Here in Australia we see, at times dramatically, the damage done by abuse of the natural world – not only to the environment but also to wildlife, to communities and countless individuals.

“The Church has a God-given duty to care for our common home, made clearer than ever in Pope Francis’ encyclical letter Laudato Si’. Querida Amazonia builds on the papal teaching and applies it boldly in one particular situation.” 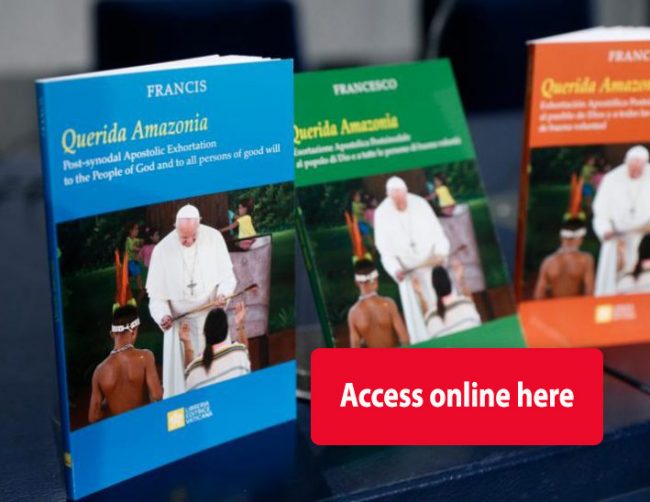 “It’s good that the Pope’s words on indigenous peoples come as we in this country consider the woeful lack of progress on closing the gap between Indigenous and non-Indigenous Australians in key areas,” he said.

“The issues faced by many in the Amazon are not foreign to Australia, and the Holy Father’s words come as a challenge and encouragement to us too.”

Archbishop Coleridge said Pope Francis has issued a particular plea for the global Catholic Church to be generous in responding to the faithful of the Amazon who long for greater access to the Eucharist and the sacramental life of the Church.

“For those in Australia, the idea that one might go weeks, months or years without access to the Eucharist is hard to comprehend. For the peoples of Amazonia, it’s deeply painful,” he said.

The Pope acknowledges the indispensable role of priests, but also praises the “vigorous, broad and active involvement of the laity” in the Amazon, as well as the powerful ministry of consecrated women and men, and permanent deacons.

“It’s when all are playing their proper part that the Church’s witness has its true power,” Archbishop Coleridge noted.

“Querida Amazonia will be a milestone in the Church’s reception of the teaching of the Second Vatican Council and a spur to us in Australia as we continue the journey of the Plenary Council. For that we are greatly indebted not only to Pope Francis, but to all who made the Amazon Synod what it was.”