Canberra’s Daramalan College was founded in 1962 by the priests and brothers of the Missionaries of the Sacred Heart.

Fifty-seven years later, the last remaining MSC (Missionarii Sacratissimi Cordis) priests and brothers are moving to a retirement home in Sydney and their residence on the site of the school is closing. 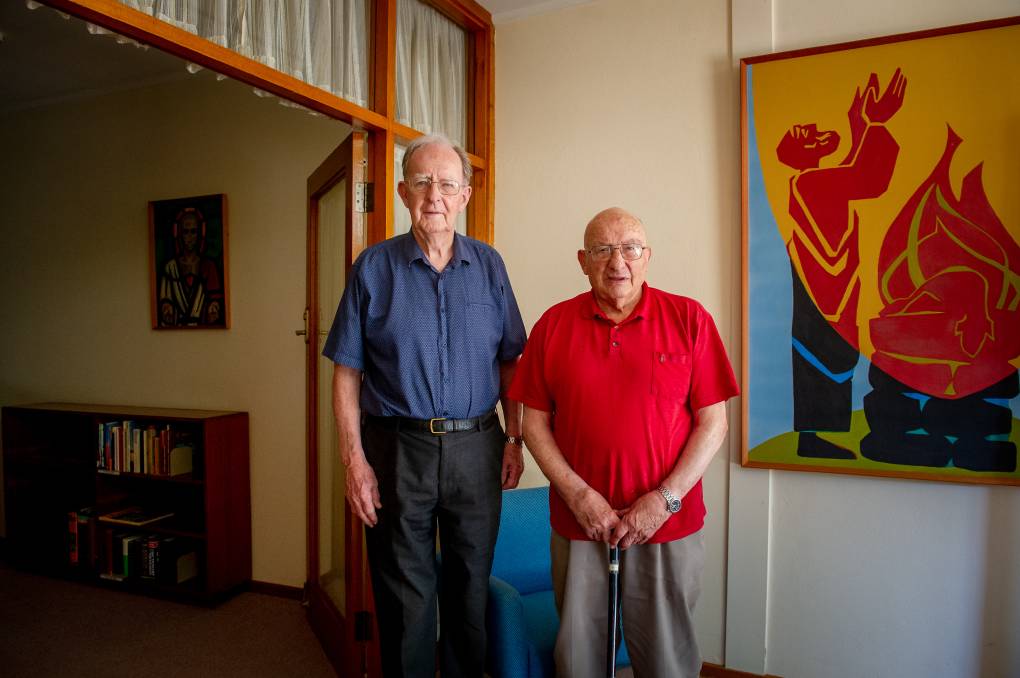 While the school now has a staff of lay teachers, there was a time – in the mid-1970s – when close to 30 priests or brothers were working at the school and living in the residence.

Father Harold Baker, 96, was the deputy principal, teaching maths and religion and providing pastoral care to the year 11 and year 12 student from 1975 to 2002.

Students also have fond memories of him teaching them social dancing. Father Jim Littleton, 89, and Father Harold Baker, 96, in the residence at Daramarlan College The building may be demolished to make way for new school facilities. Picture: Elesa Kurtz

“It’s time for me to go,” Father Harold said.

Brother John Walker is the third remaining person living in the residence. He was a registered nurse who worked at Calvary Hospital.

They are retiring to a Sacred Heart monastery in Sydney.

Father Jim said after stepping down as principal, his focus moved from the students to staff.

“Helping them to understand the ethos of the school,” he said.

“That’s is based around a spirituality; helping them to appreciate they’re loved by God.”

Daramalan College principal Rita Daniels said the brothers and priests had made a huge contribution to the school.

The last on staff was Brother Barry Smith, the business manager, who left in July.

“They have left an extraordinary legacy at the school over 57 years,” Ms Daniels said.

“They have been significant in the field of education and supporting young people to be the best they can be.”

Ms Daniels said no decisions had yet been made about the future of the residence building.

“It will eventually be handed over to the school for future development,” she said.

Daramalan board chair Chris Fearon, who attended the school from 1966 to 1973, said he was sad to see the priests and brothers go but Daramalan would “always be an MSC school”.

“They’ve been a great presence, in many ways, as guides and mentors for the students,” he said.

“We recognise things do move on. In reality, I think, people joining the priesthood, the MSC, are not going to be teachers. They want to work in the missions out in the Pacific, PNG. Unfortunately, priests with education as their mission and vocation are becoming fewer.

“But we have a fantastic group of teachers being formed in the MSC ethos and we’ve taken up the challenge.”

This article was first published on The Canberra Times, DECEMBER 14 2019

End of an era for Cootamundra Sisters of Mercy

VIDEO: It signaled the end of an era on the weekend when the Mercy Sisters officially farewelled their convent in Cootamundra. Read More