An early Christian mosaic, possibly the earliest known, decorated the ceiling and walls of a mausoleum close to area where St. Peter is supposed to have been buried, Rome, 1950.
Nat Farbman The LIFE Picture Collection/Getty Images

Besides the main courses in Theology, Scripture, History, and Canon Law, Prop offered several electives. I chose Christian Archaeology and Christian Architecture. The lecturer was Professor Josi, who assisted in the excavations under St. Peter’s in the 1930s and, currently, in the Catacombs at San Alessandro’s outside the city. He was a “hands-on” man and took us to these “digs.”

The complicated story of the building of St. Peter’s goes back to 64 CE with the crucifixion and burial of St. Peter on the Vatican Hill then outside the walls of Rome. A nearby cemetery built in the Roman custom of tombs shaped like little houses decorated with familiar objects to facilitate the after-life. Peter was buried secretly in a grave in the corner of this cemetery.

Until 306 CE, various persecutions restricted the Church’s mission, and all the Christians could do was build a little wall around the grave to stop the cemetery rubble from covering it.

As time went by, more rubble accumulated, and the wall was built higher so that those coming to pray looked down at the grave as if it were at the bottom of a well. Someone even painted it red and “graffiti’ carved into the wall, e.g., “Peter pray for Lucius” identify it. 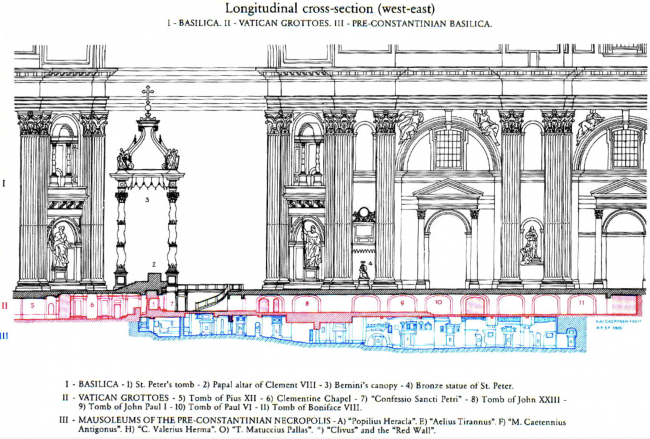 With the Edict of Milan (313 CE), Emperor Constantine allowed more freedom of religion as he re-organised the Empire. In the next years, work began on two Churches in Rome, the Arch- basilica of the Most Holy Saviour, St. John the Baptist and St. John the Evangelist, in the Lateran, the Church of the Diocese of Rome, and St. Peter’s on Vatican Hill, over the grave of St. Peter.

Constantine’s plans for St. Peter’s were quite simple. It was to be like a Roman Basilica, shaped like a Latin Cross not a Greek Cross, a wide nave in the middle flanked by two smaller naves on each side; 110 metres long and 30 metres high, with an apse at the end for an altar over the grave of St Peter. It held about 4,000 people and was plain brick on the outside with mosaics on the inside and a very large atrium in front.

There were derelict buildings on the Vatican Hill, the cemetery, the ruins of Nero’s Circus opened in 43CE with the first Christians of the Roman Church’s martyrdom, following the fire of Rome.

To provide a large and solid platform for his new Church, Constantine had the site cleared.

He was able to use one wall of the Circus as a retaining wall, and rather than flattening the tombs, in deference to the dead, he took the roofs off them and filled them with clean in-fill. Constantine’s Basilica was 30 years in the building; he did not see it completed. But despite being sacked by barbarians from time to time, it lasted from the 4th to the 16th century.

Cecilija Matic (left) and Catherine Cunningham at the Legion of Mary table in Garema Place The wind was biting and the shadows were long but ... Read More

NEWER POST$3.57 a day won’t lift anyone out of poverty
OLDER POSTBishops call for renewed emphasis on faith as Australia marks 200 years of Catholic education