How 9/11 led a first responder to the priesthood Fr. Tom Colucci at the 9/11 Memorial, the site of the September 11, 2001 attacks in New York City. PHOTO: Catholic World Reporter

On a September morning, twenty years ago, Tom Colucci was in his car driving home, weary after working the overnight shift at a firehouse in Lower Manhattan.

Then, at 8:46am, he got a call. The city was recalling all police officers and firefighters to the World Trade Center. A plane had crashed into the North Tower.

Colucci, a lieutenant with the New York City Fire Department, rushed to the scene— the South Tower was on the verge of collapse, and came tumbling down just as Colucci arrived.

The area surrounding the World Trade Center was total chaos, and he wasn’t entirely sure what to do first. He had heard 40,000 people were missing. So, Colucci and the other first responders began digging through rubble on the streets.

Less than an hour later, the North Tower fell. Tom and the other first responders continued to dig through the rubble, hoping against hope that they would find survivors. They found precious few.

More than 340 firefighters died that day, including five from Tom’s firehouse. It was the deadliest day for first responders in U.S. history, and likely the deadliest terrorist attack ever.

“So it was all very devastating. A lot of these guys were young guys, married, with families …But we just pulled each other through. And also that our faith came through. Most of these guys were Catholic, and so it was the faith [that] pulled us through,” Colucci said. 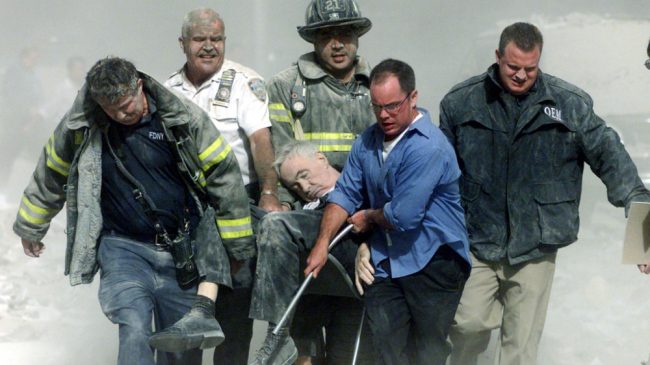 A mortally injured Father Mychal Judge is carried out of the World Trade Center by first responders, including Bill Cosgrove (in white shirt). Cosgrove says, “everybody you see in that picture was saved” from the North Tower’s collapse, moments later. Shannon Stapleton/Reuters /Landov

The victims included the chaplain of the New York City Fire Department, Father Mychal Judge. Judge was reportedly praying the rosary and offering Last Rites in the lobby of the North Tower, and had run outside the North Tower to minister to a fallen firefighter when the South Tower collapsed.

A photographer captured the moments right after Judge’s death. A now-famous photograph shows two firefighters, a police officer, an EMT, and a civilian carrying the priest’s battered body out of the wreckage.

Colucci’s involvement in search and rescue efforts continued until May of 2002, when he was promoted to captain.

Colucci had been with the New York City fire department since 1985. Now, only a few years from retirement, Colucci began revisiting his longtime interest in becoming a Catholic priest. A devout Catholic since his youth, Colucci said the priesthood had always been at the back of his mind. He said his experience on September 11th, and the witness of the heroic priests he saw that day, made him even more interested in pursuing the priesthood.

“I just saw the best that day. You know, Father Mike died the way he died, and there were other priests that came down and they were, you know, counseling the guys and a few of them were on the rubble helping us cheering us on,” he said.

Colucci retired from the New York City Fire Department in 2005, after twenty years of service. He didn’t enter the seminary right away. He had sustained a head injury while on the job a few months earlier and needed two brain surgeries. He retreated to a Benedictine monastery in western New York to recover and to discern, for the next seven years, his call to the priesthood.

During that time away, Colucci strengthened his prayer life, and felt even more secure in his vocation to the priesthood. In 2012, he entered Saint Joseph’s Seminary and College in Yonkers, New York. He was ordained in 2016 at Saint Patrick’s Cathedral in New York City, the first retired firefighter ever to become a priest.

Father Colucci has been a priest for a little over five years now. He’s pastor of a parish with a school in Walden, New York, north of New York City. He says he actually sees a lot of similarities between the priesthood and the fire service.

“You serve other people. That’s what a firefighter does, unselfishly he runs into burning buildings and emergency calls to help people out. And that’s what a priest does. He’s always available to help people out. I get calls day and night to help people in different areas, spiritually. To help them doing the sacraments, Mass and confessions…And so it’s a life of service, both professions,” he said.

Father Colucci dreams of one day being chaplain for the New York City Fire Department— and he’s on the shortlist of candidates. But for now, he stays in touch with the people he met as a firefighter, he celebrates funerals for firefighters killed in the line of duty, and he’s chaplain for a volunteer firehouse in his area. He also celebrates an annual Mass on September 11th, in Manhattan.

“We lost 343 [firefighters] that day. And since then we’ve lost about 200 due to related cancers…we’ll never forget the people that died that day and the great sacrifices they made,” he said.

PARIS, FRANCE: Both the Holy See and the Archbishop of Paris have encouraged prayer while firefighters battled a blaze on the roof of Notre-Dame de ... Read More