Amazon’s lesson for a plenary Pilgrims travel in boats as they accompany the statue of Our Lady of Nazareth during an annual river procession and pilgrimage along the Apeu River to a chapel in Macapazinho, Brazil, 3 August 2014. PHOTO: CNS/Ney Marcondes, Reuters

If SportsBet was taking wagers on the outcome of the Synod of Bishops for the Pan-Amazon region, I think plenty of people would have lost money last week.

That the Holy Father’s post-synodal apostolic exhortation, Querida Amazonia, (Beloved Amazon) was going to authorise the ordination of married men to the priesthood for the Amazon region seemed a fait accompli.

After all, there were legitimate reasons to request a dispensation for clerical celibacy in the Amazon region: the vastness of area concerned and the isolation of certain peoples within the region has seen many go months and even years without access to the sacraments.

If Pope Francis was really the progressive warrior he is portrayed to be, the evident need for more priests in the region and the overwhelming approval of married priests and women deacons at the Synod was his permission structure to make the change.

Instead, he called for what the Church has always called for in times of need: prayer and self-sacrifice for the sake of the Gospel.

In the Apostolic Exhortation, Pope Francis wrote that if we are truly convinced that no Christian community can be built up if it does not hinge on the celebration of the Eucharist, then every effort should be made to ensure the Amazonian peoples are not deprived of that great gift. 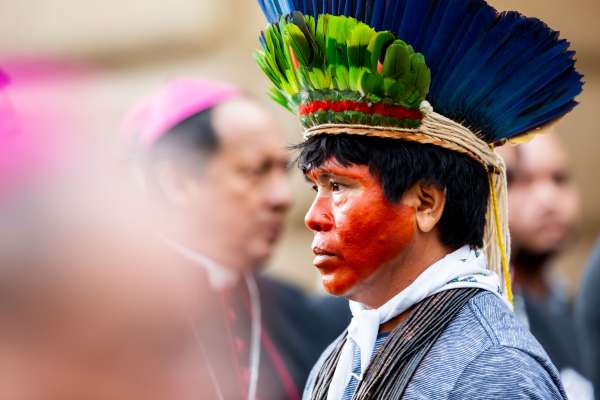 “Every effort should be made,” he wrote. He asked for effort, not simplistic solutions articulated from the comfortable distance of the western world. The Holy Father wasn’t taking the easy way out and won’t let the faithful take the easy way out either.

Pope Francis wrote that the uneven pastoral presence over the vast expanse of the Amazon region meant “a specific and courageous response is required of the Church”. The Holy Father not only called for an increase in prayer for vocations to the priesthood, but also for bishops “to be more generous in encouraging those who display a missionary vocation to opt for the Amazon region”.

A good number of people were disappointed with the Pope’s decision on celibacy, including the president of the Central Committee of German Catholics, who lambasted the Pope for not having “the courage to implement real reforms regarding the issues of the ordination of married men and the liturgical competences of women”.

He was joined by a German Catholic women’s group, purporting to represent 450,000 women, that claimed the result was “a devastating result for any woman who had hoped for equal rights within the Catholic Church”.

One Catholic politician in the United States predicted that some women would end up leaving the Church and “ultimately abandoning Christ and their own salvation” as a result of this disappointment. It doesn’t seem like any of these were too concerned about the Amazon region, and instead were hoping that the Amazon Synod would be a stalking horse for sweeping changes to Church discipline across the world.

Pope Francis reportedly addressed the issue in the presence of some US Bishops, telling them that he was being criticised for not listening to the Spirit, presuming of course that the Spirit agreed with the critics and not with current Church discipline, or with the Pope for that matter. Pope Francis greets people during the Synod of Bishops for the Amazon at the Vatican. Photo: CNS/Vatican Media

We need to be careful that the same thing does not happen with our own Plenary Council.

The idea that “everything will be on the table” at the Council has been largely unchallenged, and so there is an expectation coming from many well-meaning people that big changes will happen.

This is similar to the many, including myself, who expected the outcome of the Amazon Synod would be the authorising of married clergy in that region.

And just as happened with the Amazon Synod, there are others who are watching the Plenary Council, hoping that even small changes made to Church discipline will lead to greater and more universal ones in the future.

Querida Amazonia is our strongest indication that this is unlikely to happen because changes proposed by the Plenary Council ultimately need the approval of the Holy See.

While the needs of the Amazon region and the Church in Australia seem so different, my prediction is that the Council will tell us the solution appears to be quite similar, and that instead of proposing grand changes, the Council will once again call us back to basics of prayer and service as the primary way to address the present needs of the Church.

Neumann was born in Prachatice, Bohemia (modern-day Czech Republic), then within the Austrian Empire. He attended school in Budweis before entering seminary there in 1831. ... Read More