“Treasured son”: Max Stahl was admired by the people of Timor-Leste. Picture: Facebook

FILMMAKER and journalist Max Stahl, whose film footage of Indonesian troops firing on protesters in East Timor in 1991 brought global attention to a massacre, has died in Brisbane. A Catholic, Mr Stahl, 66, will be honoured by members of Australia’s Timorese community and friends, diplomats and family at a funeral in Brisbane’s St Stephen’s Cathedral on 12 November– exactly 30 years after he filmed the so-called Santa Cruz massacre. Mr Stahl became a national hero in East Timor after secretly filming Indonesian soldiers open fire killing hundreds of students and young people protesting against Indonesian rule. WAGGA Wagga has celebrated 200 years of Catholic education in Australia with Mass in St Michael’s Cathedral. The first Catholic school was established in Parramatta in October 1820. Bishop Mark Edwards OMI officially launched a commemorative book ‘Our Story: Sowing the Seeds from Generation to Generation’ that draws together the story of every Catholic school in the Diocese. HISTORIAN Dr Damian Gleeson is inviting Catholics to contribute to a project he is undertaking on the Irish Catholic community in NSW after winning a prestigious fellowship from the State Library. He was awarded the $20,000 Australian Religious History Fellowship for 2021. Irish-Australian Catholicism in the Penal Colony of New South Wales: Evidence from the Therry Collection will explore the Irish Catholic community in NSW between 1820 and 1860 through the lens of their experiences. To contribute to the project, contact Dr Gleeson: damiangleeson64@gmail.com A third of Australians have experienced a renewed appreciation of religion, McCrindle Research says. Picture: 123rf

AUSTRALIANS are experiencing a spiritual awakening with 30 per cent praying more since the pandemic, a new report says. The McCrindle Research, called Australia’s Changing Spiritual Climate, found that about a third of Australians experienced a renewed appreciation of religion due to the lockdown, with a third more thinking about God (33 per cent) and praying more (28 per cent). Almost half of Australians have thought more about the meaning of life (47 per cent) or their own mortality (47 per cent). Gen Z (45 per cent) are twice as likely as Baby Boomers to be extremely or very likely to attend an online church service if invited by a friend or family member. 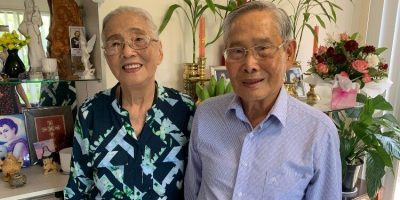 A long life and 70 years of marriage: Phien and Dinh Nguyen

AS boat people, Dinh Nguyen and his wife Phien fled war-torn Vietnam, survived dangers at sea, and started from scratch as refugees in a new land. Now they can look back on a long life filled with joy as they celebrate their platinum 70th wedding anniversary. More than four decades after arriving in Brisbane they maintain a close-knit Catholic family, pray together and attend the Vietnamese Mass at St Mark’s Church Inala. The Nguyen family is well-known for its charity efforts over many years – helping Vietnamese families settle in Brisbane and providing aid to people in their homeland.

The Australian Catholic Bishops Conference’s statement on domestic and family violence will be a focus of an online event next week to mark the International ... Read More