As 2019 closed in an inferno with holidaymakers huddled on beaches and dozens of homes destroyed, sadly the beautiful small church, Our Lady of the Princes Highway, Kiah was burnt to the ground. As the cleanup begins around the affected parishes, Denis Connor, Archdiocesan Archivist, provides Catholic Voice with a short potted history on the beloved church. 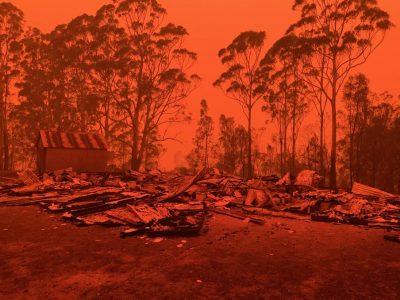 The church in Kiah, south of Eden was destroyed in the Border fire which roared north in the southerly change on Saturday, January 4. Picture RFS.

The Church at Kiah was blessed and opened by Bishop Barry in April 1929. The name was chosen for the church, ‘Our Lady of the Princes Highway’, was once favoured by the Parish Priest (of Pambula), Fr Clarence Lehane.

This church replaced an earlier church that had been burnt down by bushfires which had swept through the village in December 1926. As well as the Catholic Church, the post office and store at Kiah were destroyed by the fires. No further information about this earlier church has been located.

The cost of the new weatherboard church had been estimated at c. £1 000. A key parishioner in fundraising for the church had been Mrs Isabella McMahon, described as ‘one of the most highly-esteemed residents of the district’, and wife of local farmer James McMahon. At its opening the debt on the church was c. £400.

Fr Lehane noted in a letter to the Bishop in January 1931 that ’Seats, vestment press, vestments and Benediction requisites had been purchased for Kiah’. The church is also noted as having stained glass windows, statues of the Sacred Heart and the Blessed Virgin Mary as well as a set of Stations of the Cross.

Pastoral reports through the 1930s to 1960s indicate that mass was offered at Kiah monthly, except for a ten year period 1945-1955 when it was offered fortnightly. The numbers attending mass across these years appears to have been as high as 70 around 1940 and dropping to 20-25 in the 1960s. 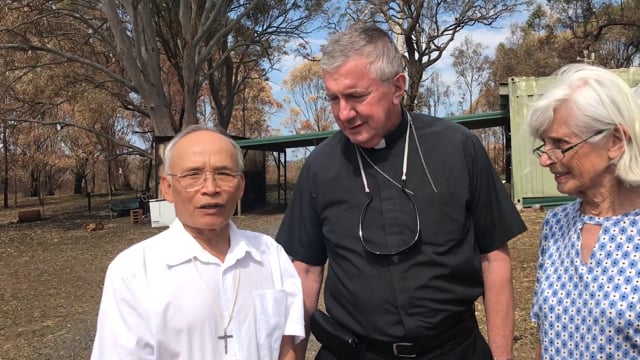 As many people are assessing the damage of the recent bushfires, Archbishop Christopher is making pastoral visits to affected parishes along the South Coast and ... Read More