The boy from Batlow and the home he built Tony and Janice Vanzella standing among the ruins of their Batlow family home.

Retirees Tony and Janice Vanzella have only been in their rental house five weeks and say it feels like a holiday home.

But it is the only place they have, after an ember storm razed their family home in Batlow in early January.

The home Tony and Janice built 35 years ago. On 11 acres. Glorious views. Where they raised five kids. The home so loved by their 11 grandchildren.

“We could fit all 23 of the family into our home and it was wonderful,” Janice said.

“This is tragic for all of us. Most of the grandkids are in Sydney and Melbourne and they loved the open space. Two of our boys had their weddings at home. It’s gut-wrenching.”

Like many Batlow folk, Tony made his living selling fruit. Batlow-born, his parents met on the boat from Italy to Australia in 1929 and married seven years later.

It was while working in the fresh fruit markets at the Old Haymarket in Sydney with his father and grandfather that Tony met Janice. 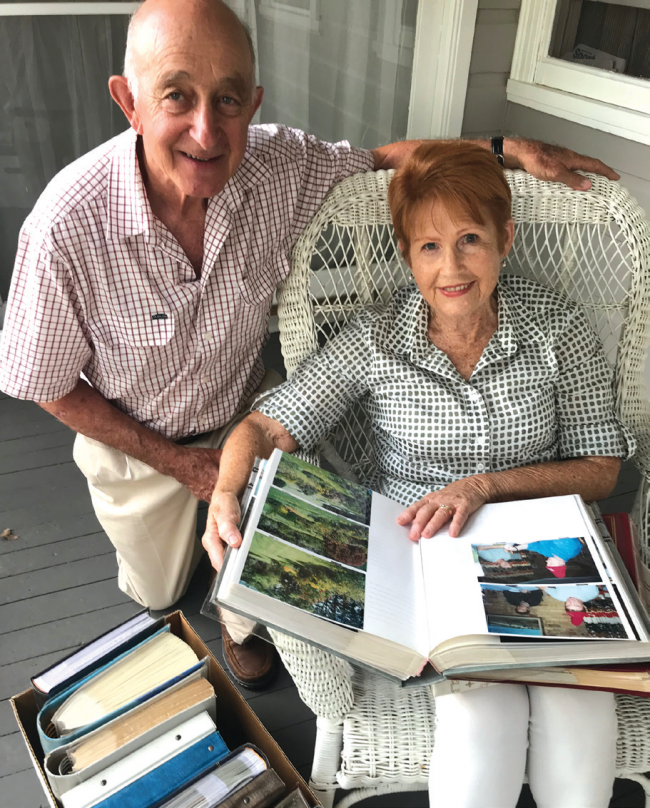 Family albums were all the couple could save.

“We had an apple stand but I wanted to get out of the markets and was ready to return (to Batlow),” Tony said.

“And I was in love,” Janice added. “My father’s family were from the country so it wasn’t unknown to me. Tony had a magnificent garden and we loved the beauty. We built our home around our family.”

The couple, who have been married 50 years, spent last Christmas in Sydney and re­turned home on New Years Day.

Batlow was being evacuated. They had to leave.

“I took out the clothes from our suitcase, washed them and put them back,” Janice said.

“They said we’d be back in five days. We hoped that trucks and water tankers would come to look after the place. But they were so intent on saving the town and we are out of town.”

Holed up in a motel in Wagga Wagga, the anxious pair waited for news. Initial reports were good. Neighbours sent photos, their house was standing.

But Tony’s beloved garden was smouldering. The wind picked up and an ember storm destroyed everything they had cherished.

“We’d put some albums and family history files in our fortified cellar so that was all we could retrieve,” Janice said.

The couple stayed in Wagga Wagga for two weeks and found a 12-month rental home in Adelong through a Catholic friend.

“I know it’s only mortar and bricks but it’s the special things you miss so much,” Janice said. “I could write a big list. As each grandchild was born I appliqued a Christmas stocking and each year they went around the chimney.

“The kids would always say, ‘Mum, did you get the Christmas stockings out’?”

The generous support of Canberra parishes has made a difference.

“We take what comes. There are people worse off who are not insured.

“We don’t blame God. It’s not about God being bad to us. I was born with a disability so I gave that thinking away years ago.

“I learned as a young child to accept what life throws at you. You take the good with the bad. We’ve been so lucky with our children. We can’t complain.”