Packages to console from those that care

Aboriginal and Torres Strait Islander readers are advised the following contains references to people who have died. “I’m gonna die, mate. Can you do something for me?”

And so Sally did.

She was with one of her people who knew he was dying.

His last wish was for a digeridoo player to play for him.

The man died shortly before this happened, but Sally was able to organise a digeridoo player and smoking ceremony in his presence not long after he passed.

“There wasn’t a dry eye in the place when this happened,” says Sally.

“He asked for one simple thing and he got it. His family wasn’t there and this is how it all started.”

That ‘one simple thing’ got the ball rolling towards full-on care packages for Aboriginal and Torres Strait Islander people in the final stage of their lives.

“It’s an area where something’s not quite right for our people,” says Sally.

Most of her people live ‘off country’ away from family and some of them die without the dignity and comfort of having loved ones present or close by.

“I just thought, ‘what can we do’? I hate sitting around. I’m going to do something practical. We can do a blanket. A shawl would be nice; they need a face mask, they need a story book.”

Care packages emerged containing not only masks, blankets and shawls, but also Aboriginal and Torres Strait Islander music and hymns.

There include notebooks so people can share their thoughts and stories and perhaps a painting of their connections to land and culture.

The project has received requests for support from as far as Broome, Bourke, Newcastle and Bathurst.

Donors have been generous with material and a room in Sally’s house has effectively become a warehouse. 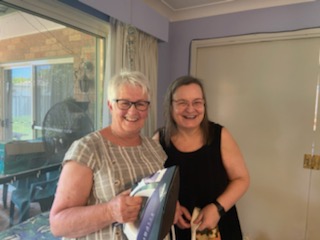 But Sally says much more is needed – and the statistics underline this.

The project is strongest in Western Australia and Victoria but elsewhere Sally says the take-up has been patchy.

It hasn’t taken off in the ACT, but she’s hoping this will change.

With support of friends from the Disciples of Jesus Community, a working bee was organised in Canberra and more are planned.

Sally wants to get the word out through parish noticeboards and church bulletins.

She says they’re doing this on the “smell of an oily rag” and she’s looking for people who can knit or crochet or sew. They hope people will consider donating.

“That’s the goal. And it’s going to be ongoing from there. Not one Aboriginal or Torres Strait Islander person is to miss out, whether they’re in their own home, the hospital, or the hospice. Their religious beliefs don’t matter. They can be Catholic, Callithumpian, or whatever.

“This might give them a bit of comfort that someone’s thinking and caring about them; and it just makes them go back into their country in their minds that they do belong.”

To obtain a palliative care package for a loved one contact Sally FitzGerald on 0422 066 080 or salfitz50@live.com. For more information on donating or knitting items for the packages visit www.natsicc.org.au/palliative-care-packages. Donations are tax deductible.

Now that you are seeing with new eyes, says John, you know the Spirit of Truth, because s/he is with you and in you. ‘Because ... Read More