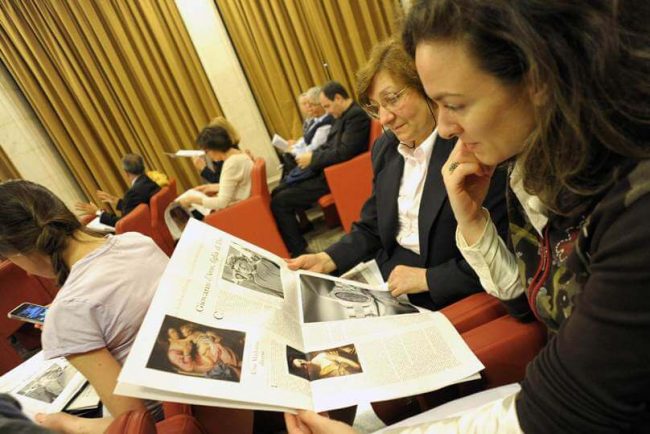 The recently-released Australian Catholic Mass Attendance Report 2016 provides us with some raw material for a good discussion about why Mass attendance rates might be so low and still dropping, even though they have now steadied.

I wanted to draw attention to one of the statistics in particular – the rate of women attending Mass in Australia.

Overall, women’s attendance rates have fallen to around 14 per cent – still higher than men, but much lower than they have been before.

But both the women’s and the men’s rates of attendance have fallen at the same speed over the last 20 years.

There’s no detectable gender effect – we can’t point to anything in particular that might have made men fall away faster or slower than women.

I’m saying this because eager minds will set to work and will begin grinding out the usual boilerplate about ‘inclusivity’ and ‘ministry’ and hinting that if just women were a little bit more included in everything Catholic, we’d reverse this trend.

We won’t. And I can say that with conviction because for the last 20 years, women’s formal inclusion in the Church has skyrocketed.

There are now more women in diocesan positions of authority, in Catholic education, on parish councils, being leading theologians, working in university departments, and anywhere else you can think of, than ever before.

And yet the one place they’re apparently not so keen to be is at Mass on Sundays. We don’t have data on why anyone’s rates of attendance are dropping, but I have a solid theory based on some data.

We know from the data that most people at Mass are women, and also that they’re mostly over 60 years old. I think that over the last 20 years, those faithful old widows and flower ladies and church cleaners have gradually departed for a place where they won’t be asked to do anything except worship God.

People can and do die. Old Catholics die. And they’re not being replaced. This includes women.

There are a handful of women in Australia – mostly allied with fringe groups with imaginary membership numbers – who want to be ordained as deacons, and possibly as priests.

Some would like their husbands to be ordained, or to marry men who are already priests.

They’re welcome to their opinions (and their men friends). But it’s hard to imagine that if they were given their own way, this tiny group of misfits would spearhead a great feminine spiritual revival in Australia. Most of them are well past retiring age.

What we can see from the data is that both women and men in Australia have simply found better things to do with their time on Sundays, at more or less the same rate as each other.

We know this already from previous studies: that people stop coming to Mass because they no longer believe they have to, because they think they have better things to do with their time and because they don’t really believe much of what the Church teaches.

It’s a credibility problem, not an inclusivity problem.