Pope Francis on St John Paul II: ‘I Learned From Him’ 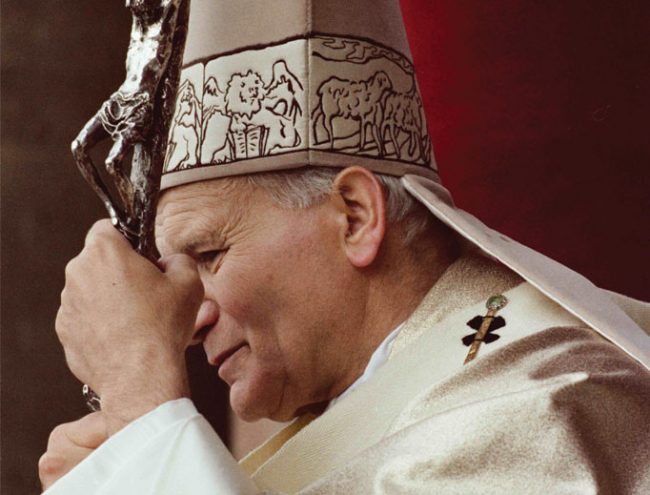 In the book, Pope Francis says he is “convinced celibacy is a gift, a grace, and walking in the footsteps of Paul VI and then of John Paul II and Benedict XVI, I am convinced that celibacy is a decisive grace that characterizes the Latin Catholic Church. I repeat: It is a grace, not a limit.”

VATICAN CITY —  In a newly published book, Pope Francis answers questions about himself and St. John Paul II, saying he learned the importance of joy and mercy from his predecessor, and they are in “total harmony” on the subject of priestly ministry.

“I think that joy is the most important characteristic of the encounter with the risen Jesus,” Pope Francis said, noting the joy and mercy of John Paul II’s pontificate, “I learned from him.”

Pope Francis’ thoughts on his predecessor and other topics are recorded in the Italian-language book “St. John Paul the Great,” published Feb. 11 and co-authored with Fr. Luigi Maria Epicoco.

The book is divided into five chapters, each with information on an aspect or period of the life of John Paul II, written by Fr. Epicoco. These are followed by conversations with Pope Francis on related topics which took place from June 2019 to January 2020.

In one chapter, Fr. Epicoco, 39, quotes at length from John Paul II’s letter “Gift and Mystery,” which the Polish saint wrote for the 50th anniversary of his priestly ordination.

Pope Francis said he believes it is enough to read letters he wrote on Holy Thursday or some of the homilies he gave as a bishop in Buenos Aires “to see that there is total harmony with the thought of St. John Paul II with respect to the priesthood.”

Pope Francis goes on to say he is “convinced celibacy is a gift, a grace, and walking in the footsteps of Paul VI and then of John Paul II and Benedict XVI, I am convinced that celibacy is a decisive grace that characterizes the Latin Catholic Church. I repeat: It is a grace, not a limit.”

Pope Francis was a provincial superior of the Jesuits when John Paul II was elected Bishop of Rome. He noted that at the moment the news of the new pope’s election was announced, he was driving. Hearing the name “Wojtyla” and not recognizing it, he said he first thought the new pope was African.

“I heard his first words and had a very good feeling,” Pope Francis recalled. “And this impression was strengthened immediately afterwards when they told me that he had been a university chaplain, a professor of philosophy, a mountain climber, a skier, a sportsman, a man who prayed a lot. I liked him a lot. I immediately felt a great fondness for him.”

The first encounter between the two men took place when John Paul II visited Argentina in 1987. It was “a dark moment in my life,” Pope Francis said. Then still Fr. Jorge Bergoglio, he had returned to Argentina after being in Germany to write his doctorate “and to get away from a tense atmosphere in my religious province itself.”

Their second meeting was in 1994 during the Synod of Bishops on Consecrated Life, when Bergoglio was auxiliary bishop of Buenos Aires.

In 2001, Pope John Paul II made Archbishop Bergoglio a cardinal.

Pope Francis shared a memory from the moment he received the red hat from the pope: “I felt a strong desire, while I was kneeling to receive the cardinal’s biretta, to not limit myself only to the exchange of the sign of peace, but to kiss [John Paul II’s] hand.”

“Some people criticized me for this gesture,” he added, “but it was spontaneous for me.”

“It is enough to look at his life” to see that John Paul II had “the smell of the sheep,” Francis said. “He was a pastor who loved people and the people returned it with an immense love.”