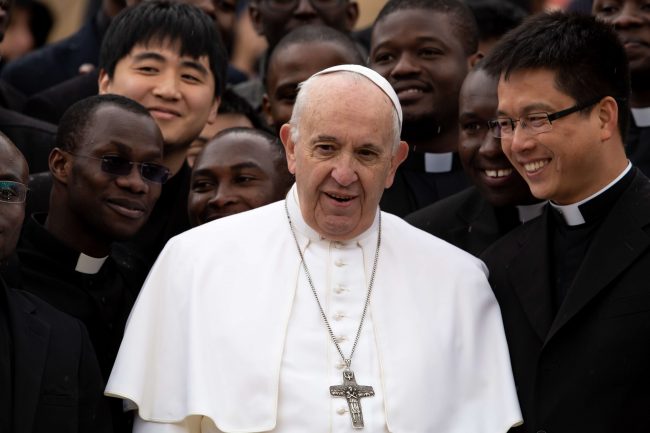 Vatican City, Feb 17, 2020 / 05:09 am (CNA) – Pope Francis has requested that priests in formation for the Holy See’s diplomatic service be required to spend one year in missionary work, the Vatican announced Monday.

The pope has asked the change to go into effect for the 2020/2021 academic year. He called for the curriculum update in a letter to the president of the Pontifical Ecclesiastical Academy, Bishop Joseph Marino.

In order to face “growing challenges for the Church and for the world, future diplomats of the Holy See must acquire, in addition to solid priestly and pastoral formation, and the specific one offered by this Academy, also a personal mission experience outside their own Diocese of origin,” Francis wrote.

It is an opportunity for the priests to share “with the missionary churches a period of journey together with their community, participating in their daily evangelizing activity,” he added.

The pope noted in his letter, signed Feb. 11, that he had first expressed the desire for the formation of priest-diplomats to include a missionary year at the end of the Amazon synod in 2019.

“I am convinced that such an experience will be useful to all young people who prepare or begin priestly service,” he said, “but in particular to those who in the future will be called to collaborate with the Pontifical Representatives and, subsequently, may in turn become Envoys of the Holy See to the nations and particular churches.”

The Pontifical Ecclesiastical Academy is a training academy for priests from around the world who may be asked to enter the diplomatic corps of the Holy See.

In addition to studying theology and canon law at pontifical universities in Rome, the students learn topics and skills relevant to diplomatic work, such as languages, international diplomacy, and diplomatic history.

American Bishop Joseph Marino has been president since October 2019. He has been in the diplomatic service of the Holy See since 1988.

The pope said implementation of the missionary year will require cooperation with the Secretariat of State, especially with the section for diplomatic personnel.

He added that, “having overcome the initial concerns that could arise,” he is sure the experience “will be useful not only to young academics, but also to individual churches with whom they will collaborate.”

Francis also said he hopes it will inspire other priests to volunteer to serve as a missionary outside his own diocese for a period.

KINSHASA: The nearly year-long Ebola outbreak in the Democratic Republic of Congo (DRC) has reached the level of an international health emergency. Read More