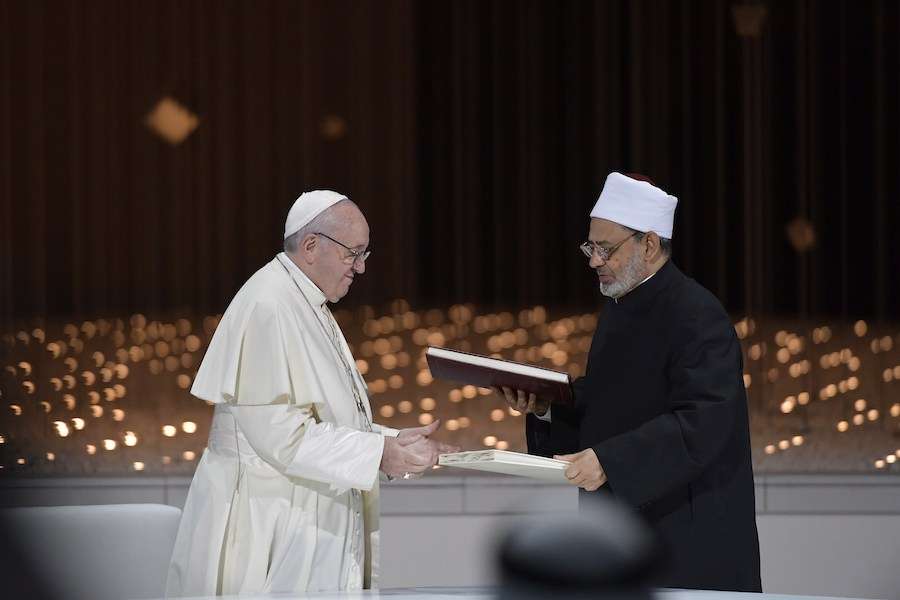 ABU DHABI, UAE: Catholics, Muslims and all who believe in God must work together to build a culture of love, peace and human fraternity, Pope Francis said in a joint statement he signed with Ahmed el-Tayeb, Grand Imam of al-Azhar, during an interreligious meeting in Abu Dhabi.

The document, entitled “A Document on Human Fraternity for World Peace and Living Together,” invited “all persons who have faith in God and faith in human fraternity to unite and work together so that it may serve as a guide for future generations to advance a culture of mutual respect in the awareness of the great divine grace that makes all human beings brothers and sisters.”

The signing took place Feb. 4 during Pope Francis’ visit to Abu Dhabi, capital of the United Arab Emirates, a trip intended to promote interreligious dialogue and give support to the country’s Christian minority. Francis is the first Pope ever to visit the Arabian peninsula.

The document discussed the importance of religion in building a peaceful and free society and the challenges of an increasingly secular world. It condemned all practices and policies detrimental to human life and freedom.

READ ALSO:  Man leaves fortune to town that saved him from the Nazis

“This divine wisdom is the source from which the right to freedom of belief and the freedom to be different derives. Therefore, the fact that people are forced to adhere to a certain religion or culture must be rejected, as too the imposition of a cultural way of life that others do not accept.”

This statement must be read in the proper context and perspective, said Dr. Chad Pecknold, associate professor of systematic theology at The Catholic University of America in Washington, D.C.

“In sensitive inter-religious contexts, it is fitting for the Holy See to acknowledge that despite serious theological disagreements, Catholics and Muslims have much in common, such as a common belief that human beings are ‘willed by God in his wisdom,’” Pecknold told CNA.

“The idea that God wills the diversity of color, sex, race and language is easily understood, but some may find it puzzling to hear the Vicar of Christ talk about God willing the diversity of religions,” he noted.

“It is puzzling, and potentially problematic, but in the context of the document, the Holy Father is clearly referring not to the evil of many false religions, but positively refers to the diversity of religions only in the sense that they are evidence of our natural desire to know God.”

“God wills that all men come to know Him through the free choice of their will, and so it follows that a diversity of religions can be spoken about as permissively willed by God without denying the supernatural good of one true religion,” he added.

READ ALSO:  Pope to Filipino College: Have a ‘prophetic gaze’ on future

The Catechism of the Catholic Church speaks about the Church’s relationship with the Muslims: “The plan of salvation also includes those who acknowledge the Creator, in the first place amongst whom are the Muslims; these profess to hold the faith of Abraham, and together with us they adore the one, merciful God, mankind’s judge on the last day.”

The Second Vatican Council taught further that “the fullness of the means of salvation can be obtained” through the “Catholic Church alone.”

Among other things, the document also condemned terrorism. It called for equal rights and access to education for women, called on believers to care for the poor and vulnerable, and called on world leaders “to work strenuously to spread the culture of tolerance and of living together in peace; to intervene at the earliest opportunity to stop the shedding of innocent blood and bring an end to wars, conflicts, environmental decay and the moral and cultural decline that the world is presently experiencing.”

As Grand Imam of al-Azhar, Tayeb holds one of the most prominent titles in Sunni Islam, and is head of the the al-Azhar Mosque and al-Azhar University in Egypt.

Tayeb is considered a tolerant and moderate Muslim leader, and has rejected connections to the Muslim Brotherhood and condemned ISIS. He also allowed a woman to remain at al-Azhar University after she was facing expulsion for allegedly hugging a male student. However, he has also said he believes that apostasy from Islam is punishable by death.

In the interreligious meeting, Pope Francis said that people of different religions must work to build the future together “or there will not be a future.”

“The time has come when religions should more actively exert themselves, with courage and audacity, and without pretense, to help the human family deepen the capacity for reconciliation, the vision of hope and the concrete paths of peace,” he said.