Pope Francis to financial leaders: Ending poverty is our duty “A rich world and a vibrant economy can and should end poverty,” Pope Francis said Feb. 5.

The pope made an unscheduled appearance at a Vatican conference on “New Forms of Solidarity,” organized on the premise that “an outdated financial structure is endangering our planet and dividing our societies.”

“You, who have kindly gathered here, are the financial leaders and economic specialists of the world,” Francis said. “You know firsthand what are the injustices of our current global economy, or the injustices of each country. Let’s work together to end these injustices.”

The economic solidarity conference occurred ahead of Pope Francis’ international economic summit, “The Economy of Francesco” — named for the the pope’s patron, St. Francis of Assisi.

The gathering will bring 2,000 young economists and entrepreneurs together in Assisi March 26-28 to explore alternatives to the current global economic system that are more beneficial for the poor and environment. Nobel laureate economists Amartya Sen and Muhammad Yunus will provide the opening remarks.

In his comments, Pope Francis said that the 50 richest people in the world could together end child poverty.

“The 50 richest people in the world have an equity equivalent to 2.2 trillion dollars. Those 50 people alone could finance the medical care and education of every poor child in the world, whether through taxes, philanthropic initiatives or both. Those 50 people could save millions of lives,” he told the conference.

“If there is extreme poverty in the midst of wealth – also extreme wealth – it is because we have allowed the gap to widen to become the largest in history,” he said.

“Each year hundreds of billions of dollars, which should be paid in taxes to finance medical care and education, accumulate in tax haven accounts thus preventing the possibility of decent and sustained development of all social actors,” he said.

The pope also denounced government spending on “the industry of war,” saying: “The world loses billions of dollars in armaments and violence every year, which would end poverty and illiteracy if they could be redirected.”

“A new ethic means being aware of the need for everyone to commit to work together to close the fiscal lairs, avoid evasions and money laundering that steal from society, as well as tell the nations the importance of defending the justice and the common good over the interests of the most powerful companies and multinationals – which end up suffocating and preventing local production,” Pope Francis said.

“Hundreds of millions of people are still mired in extreme poverty and lack food, housing, medical care, schools, electricity, drinking water and adequate and indispensable sanitation services. It is estimated that approximately 5 million children under 5 this year will die from poverty. Another 260 million children will lack education due to lack of resources, due to wars and migrations,” the pope said. “These realities should not be cause for despair, no, but for action.” 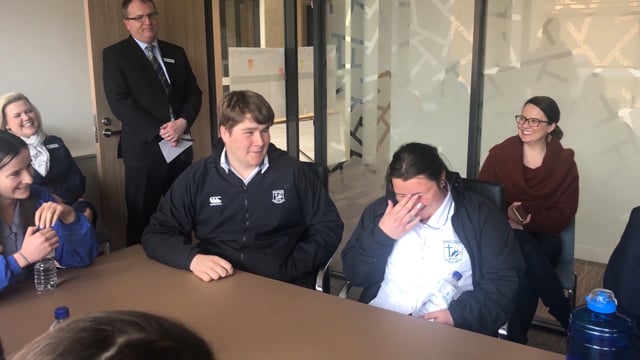 As part of the Archdiocesan student listening and dialog session held at St Christopher’s Pastoral Centre on Tuesday September 4, Archbishop Prowse spoke with a ... Read More