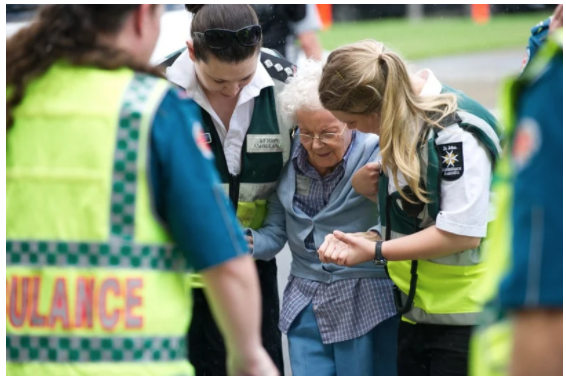 The society that still cares: a woman displaced by flooding in Brisbane in 2011 is assisted by rescue personnel. Photo: CNS

Additional relief is on offer for towns along the NSW south coast that have faced not only devastating bushfires but flooding and the impact of COVID-19 all in the last seven months.

The St Vincent de Paul Society is rolling out a new program funded by donations to the Vinnies Bushfire Appeal.

The Vinnies Canberra/Goulburn Community Bushfire Grants Program will see 70 grants of up to $20,000 provided to registered community organisations to help them administer their own local recovery projects.

The New Program from Vinnies Canberra/Goulburn, which provides services to the Act, Queanbeyan-Palerang, Much of  The South Coast Region and Snowy Mountains Region, will stand alongside recovery initiatives from Vinnies NSW.

Anne Haywood, the Sussex Inlet Vinnies president said that the Shoalhaven town with a population of only 4000 is a “struggling little community” that manages to hold its own by banding together when there’s a need.

Residents were evacuated and streets were left underwater late last month after wild weather caused water to surge into the coastal town and uprooted trees which crashed into properties.

“We look after each other. If someone’s child is seriously sick for example, people will pitch in to help however they can.”

But the big worry now is that the September school holidays will bring the coronavirus to the tight-knit community.

“We don’t want it to come into the town,” Ms Haywood said.

“Last July we had a lot of people in town supporting our local businesses and that was good but now people are a bit worried.

“We have an older community in Sussex Inlet and we want to protect them, too.”

NEWER POSTCardinal Pell speaks on maintaining hope in prison
OLDER POSTWhat do you put your trust in?