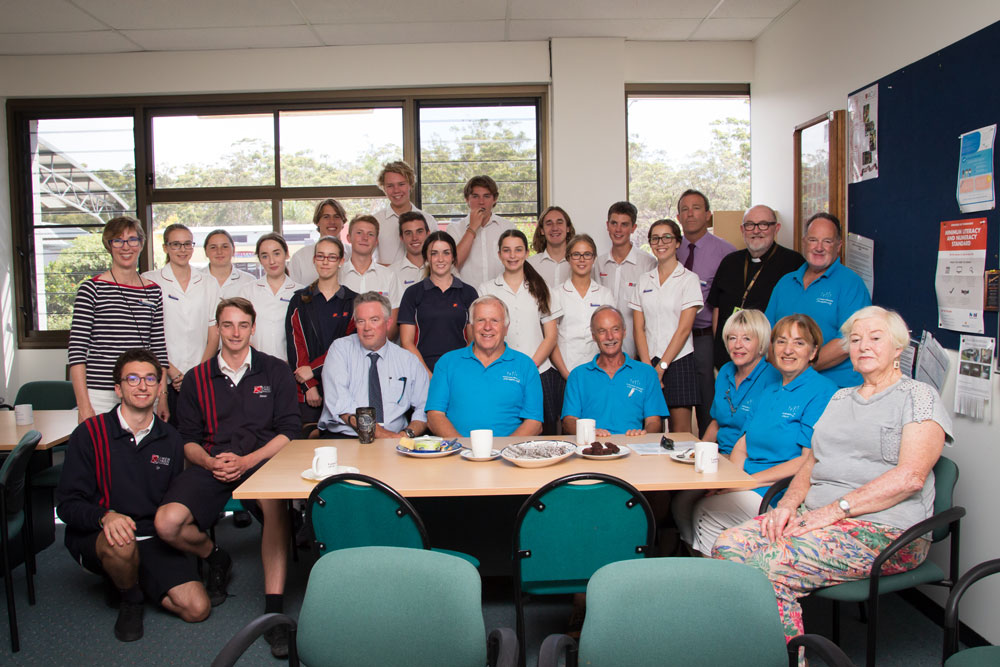 Students from the Lumen Christi Catholic College Social Justice Advocates catered the event and gave speeches acknowledging the incredible work the SJAs do in our community.

The Social Justice Advocates of the Sapphire Coast was established in 2012 by the local Catholic Parish Priest Father Constantine with approximately 30 members in total. In that short time, they’ve achieved amazing work for the common good.

In the first two years, they concentrated on world poverty issues focusing in Kenya where they supplied food and blankets. Then moving to establish facilities for Somalian refugees and the disabled. For the next five years, they would focus on local poverty and justice issues including the homeless, victims of domestic violence, Aboriginal Youth land, recycling food for the hungry, welcoming refugees or networking with the Red Cross and supporting multicultural projects.

They have also held public meetings with prominent guest speakers aimed to educate the public on the bigger social problems we face. Whilst also working in our four secondary schools with immersion projects, financing scholarships and forming Junior Social Justice Groups.

Present at the morning tea was Social Justice Advocate Chairman Mick Brosnan who has been associated with Lumen since 2001 when the school started. Lumen Christi nominated Mick for the Order of Australia Medal which he was awarded on Australia Day.

Mick gives 30 to 40 hours weekly to this work for the poor. He coordinates the annual Samaritan shop over the Christmas holiday and works there every day, 6 days a week, 9 hours a day. The shop has raised excess of $300,000 for local causes that help the poor.

He also travels to Papua New Guinea 5 times a year for several weeks to build schools and homes for the needy in the slums, he does this voluntarily at his own expense. While there he works for an organisation called “We Care” to work for the poorest of the poor.

Mick overseas two units and 6 caravans that the social justice own to house the homeless in the Bega Valley. He also assists Domestic Violence victims with housing and furniture.

Mick gets called in regularly with his bobcat and tip truck to give voluntary hours of service to charities, churches, schools and service groups like Rotary. He is an active member of Vinnies.

Mick coordinates the Friday food pick up from retail outlets like Woolworths Tura and Merimbula and delivers the donated food to Pam’s in Eden where it is made into food parcels or cooked up for needy locals.

Mick supports other local charities like Jenny Stewart‘s water tanks to the poor in Nepal. He works and advocates for refugees and Asylum Seekers and welcomes them to the Bega Valley.

Mick lives his faith and encourages others to do so. He has worked hard to create scholarships for needy students and start junior social justice groups.

Lumen Christi is proud to be associated with the Social Justice Advocates of the Sapphire Coast and looks forward to being able to continue to support them in their work.

With Catholic parishes across the country set to be full to overflowing next week, the Christmas season is being seen as a great time to ... Read More