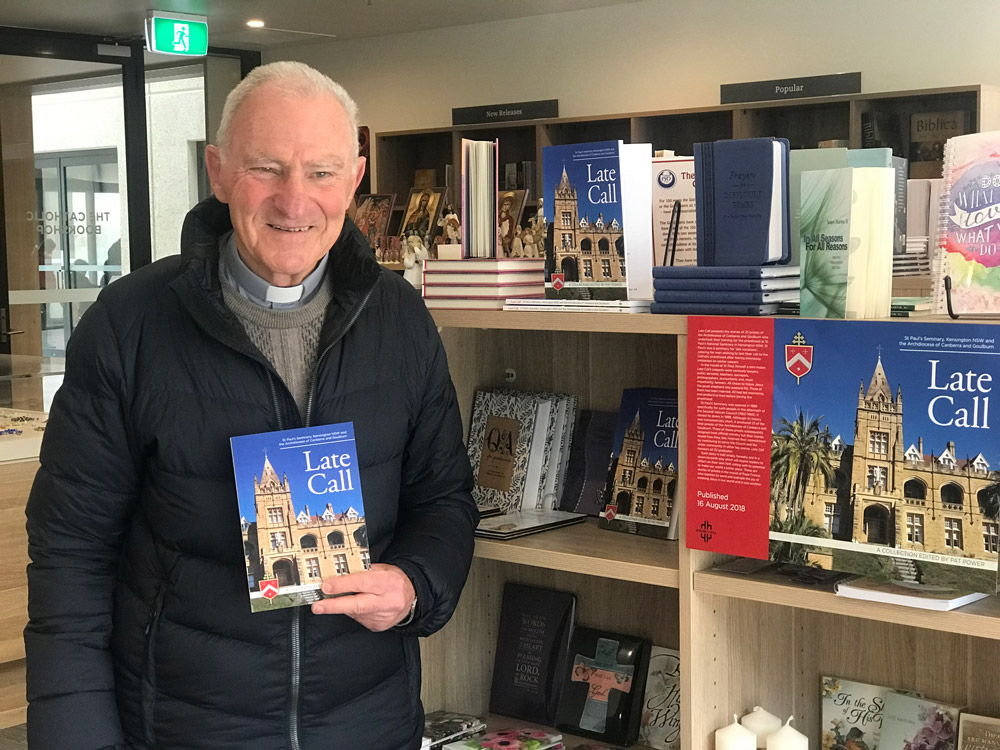 Bishop Pat Power, editor of the new book Late Call that tells the story of the 23 priests from the Canberra Goulburn Archdiocese ordained at St Paul’s Seminary in Kensington. Photo Chris Gordon.

Built in 1897, for years its Pyrmont sandstone walls stood at the centre of the Sacred Heart Monastery overlooking  Kensington, both church and later school for local Catholics.

Today, that central building and those around it perform a range of functions, including use as a conference centre.

But for thirty shining years within the Monastery grounds operated a seminary for “older men,” an innovative idea at the time, giving men who received a late vocational call an opportunity to graduate in four years rather than the usual seven.

“Twenty three of our best priests went through St Paul’s,” according to Emeritus Bishop Pat Power, editor of the new book ‘Late Call’.

Bishop Power, a graduate of St Columba’s, Springwood and St Patrick’s, Manly, said he always had a great admiration for the 23 graduates of St Paul’s from this Archdiocese. For that reason he took on compiling the book as a labour of love to tell their.

His fascination with St Paul’s, aside from his personal fondness for the place where he attended many bishop’s conferences, stems from the wide range of backgrounds the seminarians came from.

“It was a seminary for late vocations and it was started by the Missionaries of the Sacred Heart,” Bishop Power said.

“So what St Paul’s offered was a four year course rather than a seven year course. From there it developed that some of the bishops were interested, and then the idea expanded to be a national seminary.”

The process of collating the book began last year for Bishop Power while attending the Archdiocesan retreat. He began reaching out to the former seminarians to see who was interested in the project and when there seemed sufficient interest, he got them to write a potted version of their stories (between 500 and 1000 words). Of the original 23, 17 are still living and others were sought to write for those who have already passed away.

“The stories themselves are simply written,” Bishop Power said.

“I found, when I sat down to read them, that the stories spoke for themselves in a way that touched my heart and I believe in a way that would speak lucidly to the readers of this book. They are just a nice collection of stories.”

Bishop Power points out that the reason that St Paul’s closed was related to the reason it opened in the first place. In 1968, the seven year requirement at traditional seminaries was rigid, but by 1998 there was more flexibility, accommodating late call seminarians as well.

Today, the buildings remain although few traces of the seminary do. New stories are being created and told around those old buildings, but with the help of this book, some of the old stories will now be remembered as well.