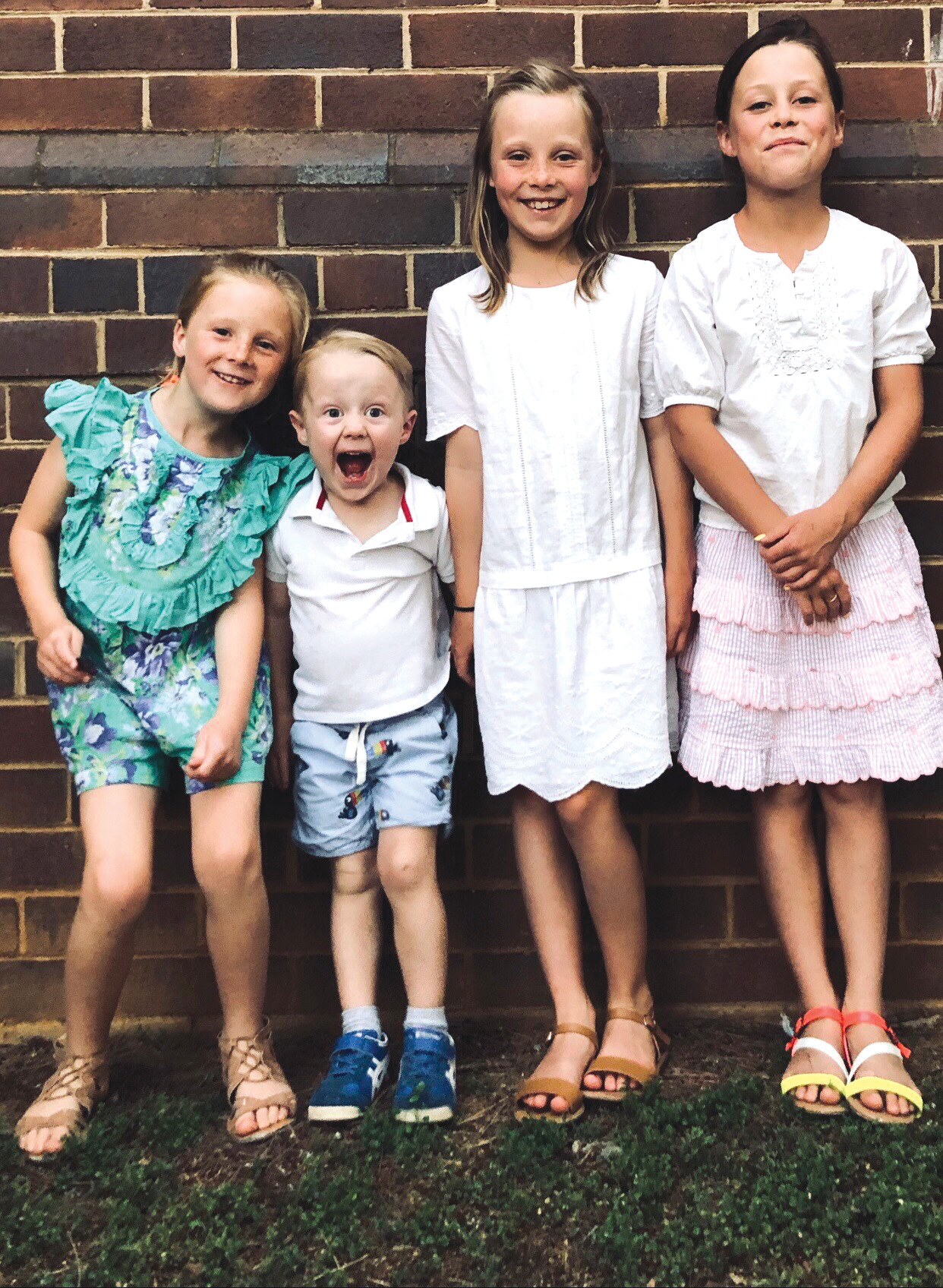 Mass is ritual. It’s tradition, it’s repetitive and it’s steeped in history. My own mass rituals though are just as repetitive and routine-like and, without them, my family just couldn’t be part of this Sunday ceremony.

As my husband, Charlie is not Catholic, most of my Sunday mass visits involve me as the sole adult with my four charges ranging from ten to three. We stop at the font on the way in and every one blesses themselves with robotic movements and lyrics, all eyes on the three-year-old who mumbles, mumbles, mumbles until … a very loud, very confident clap of the hands and … AMEN! As proud as punch, he enters the church first and heads straight for the small toy box at the back.

Let me introduce you to Game Plan strategy #1. The toy box which is made up of our own basket, own toys and own books – never played with or read at home but, placed at the back of the church, they are seen as the shiniest, most exciting and tantalising mismatch of wonder in all of the land!

Monty chooses as many of the carefully ‘donated’ non-noise making toys as he can fit in his chubby little hands and we proceed to ‘our’ pew.

Game Plan strategy #2. The pew chosen for its lack of any pews in front (also known as toddler forts – ripe for climbing), chosen for Dave and Trev who sit closest to us and don’t mind the odd softball landing on their shoulders, chosen for the side doors nearby which allow for discreet exiting, chosen for the easy access to powerpoints when I need to neutralise my pretzel/Jatz/rice cracker bribery evidence with the church Dyson and chosen for the bonus that is the industrial fan, needed badly during very busy Christmas Masses!

Game Plan Strategy #3 is perhaps the greatest blessing of all blessings bestowed during Sunday Eucharist at our church … Children’s Liturgy. As soon as we have made the sign of the cross, the children are called forth and, a snack bag of pretzels in hand, Monty and his three sisters present for breaking open of the word – child-friendly style.

Once every eight weeks, I am the one they present to but, for the other weeks, I take a deep breath out, relax into my pew and enjoy the Liturgy of the Word. I could be wrong but Dave and Trev’s shoulders seem to drop a couple of centimeters too! So, until the offertory procession, I pretend I’m 84. Enjoying silence, peace and quiet and food for the soul.

If we’re not straight to the back to hectically divide the two offertory items into five to appease every family member for the trip down the aisle when rostered on, the children join me and Monty knows it’s ‘kneeling time’. Which he does with impressive conscientiousness.

Game Plan strategy #4. I watch with guilt as many of our senior members smile at my blond little three yr old, kneeling and gazing into my eyes smiling. I know how misguided their thoughts of what an incredible parenting job we have done is, I know that not in their wildest dreams are they thinking that the smile and eager eyes from Monty have nothing to do with how well-trained a mass goer he is or how much he is enjoying the Eucharistic Prayer. They don’t see the sneaky snap lock bag of two Allen’s snakes that I spend the breaking of the bread bribing Monty with.

When we stand, he is momentarily distracted by the Sign of Peace where he shakes hands with Dave and Trev, the family and Jean, dear Jean, who takes his hand no matter how sticky or grubby it is! When we kneel back down, two snakes become one and it’s ‘blessing’ time.

Now, one may think that surely after communion, we could last the dismissal without the need for another treat but not where Monty is concerned because that small wafer, transformed into the Body of Christ is, like eating a giant Freddo frog in front of a small child so I need snake #2 as much as Jean needs to sanitise her hands after the sign of peace! Snake two is demolished, I get to offer up some prayers and voila!

The final hymn is played and I can either a) chat to the other parishioners or b) employ the Dyson to erase all evidence of my detailed and comprehensive Game Plan, especially the pretzel part!! My ritual is well-oiled, well-rehearsed and blessedly supported by a wonderful bunch of fellow Eucharistic brothers and sisters so that we can feel like the winners on Game Day!

Penny Lucas is married to Charlie and mother of four children. Penny describes herself as the “very lucky” teacher of  Years One and Two at Trinity Primary School in Murrumburrah

In response to COVID-19, the Archdiocese has introduced new protocols or rules about Mass and other church services to reduce the spread of the virus. ... Read More