Tales from the ‘ole school days’; celebrating grandparents and the elderly Pope Francis said they are “the bread that nourishes our life”.

He was referring to the world’s older citizens whose contributions were recognised last weekend with the church’s first ever World Day for Grandparents and the Elderly.

The Pope announced earlier in the year that the day would be an annual event to fall on the fourth Sunday of July, close to the feast day of Jesus’ grandparents, Saints Joachim and Anne.

The Canberra and Goulburn archdiocese marked the inaugural day with moments of reflection and prayer at church services and special events at its schools.

At Canberra’s St Thomas More primary school they held a special liturgy service last Friday where the younger generation paid tribute not only to grandparents but to the school’s “grand friends”, stand-in seniors for students without grandparents.

Ruby Kenny is a year six student at the school and she said the day was all about saying thanks to her grandparents’, Elaine and Ron. 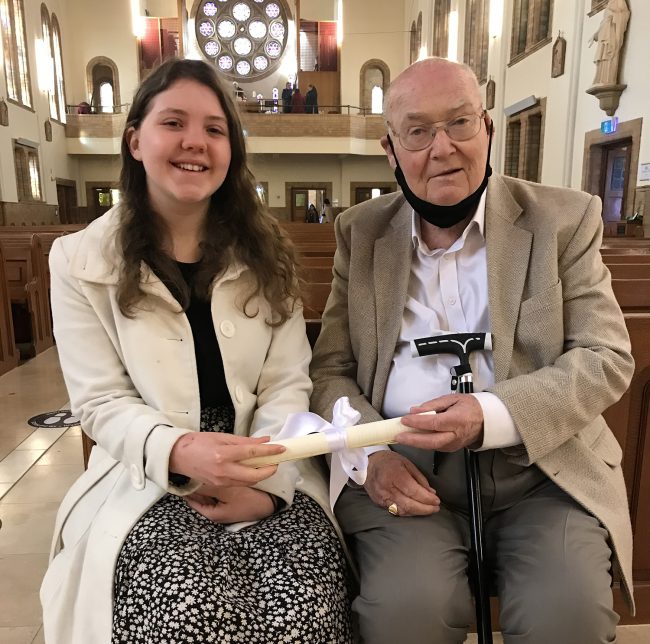 Cathedral parishioner Colliss Parrett was nominated as the Archdiocese of Canberra and Goulburn’s representative and ‘spiritual grandfather’ for Sunday’s Inaugural World Day for Grandparents and the Elderly. On behalf of the Archdiocese, university student Elizabeth Doyle presented Colliss with a copy of Pope Francis’ letter.

“They help us around the house and do our washing sometimes and they also make us some good food,” said Ruby.

After the liturgy, the two generations mixed in the classrooms to compare notes on their schooling.

Years one and two even got a chance to ‘interview’ some of the guests where they heard tales of the ‘old school days’, of Sunday roasts of lamb and veges, trips to corner stores for lollies, and devoted hours writing on slates at long desks.

The St Thomas More acting assistant principal, Kristy Poole, said the role of the grandparents and the “grand friends” was especially significant because of the school’s large number of defence and military families.

“The presence of that [extended] family connection is really important for our school community,” Kristy said.

Like many others of the younger years, Ruby Kenny would agree. “My grandparents mean a lot to me,” she said. “They make me feel happy and comfortable when I’m sad.”

Archdiocesan Clergy at last year's Assembly. THE annual group photo has been shelved but the clergy assembly went ahead this week, online. The gathering of ... Read More