John Formosa points out the image on the shroud

“The Shroud of Turin is a unique fabric that provides evidence of a trans-dimensional event having taken place,” according to John Formosa, a Sydney shroud enthusiast and member of the Catenian Association.

“It presents evidence of a crucified body of a man having moved from a physical state into another dimension that had left an imprint on the shroud,” he said.

It sounds like science fiction and the big questions surround-ing the shroud involve science – and whether it is fiction.

Recent advances in computer power are opening windows into its mysteries, and scientists across the world and in Australia are debating basic questions: what is the shroud, how old is it, and how was the image created?

What we know about the Shroud of Turin is that it’s a single, rectangular piece of cloth, about the size of two large table cloths placed end to end.

To the naked eye, it contains front and back image of a man. Believers say it is Christ as he appeared wrapped in his original burial cloth.

The image, though, is faint, a tad hazy. While it’s intriguing, to that naked eye it’s not so exciting. 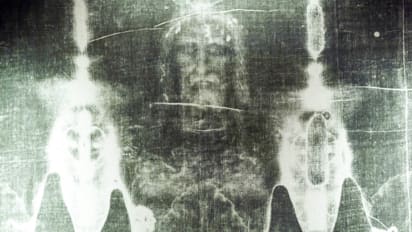 It got exciting in 1898 when Secondo Pia, an Italian photographer, developed his photo-graphic plates of the shroud and was astonished to see what appeared to be a detailed image of the man’s face in negative. Was it Christ?

Many believe so. The full image bears apparent wounds consistent with gospel accounts of the crucified Jesus.

The Catholic Church itself has no official position on the shroud’s authenticity. In 2020 Pope Francis described it as an icon of the crucified Christ.

Attempts over the years to date the shroud have been controversial and 30 years ago carbon-14 dating, widely used in archaeology, was called in to help.

In 1988, three separate shroud samples were sent to labs in Switzerland, the US, and UK for carbon-14 testing.

Results came back dating the shroud to between 1260 and1390 AD – to apparently solve the enigma.

Except it didn’t, at least for some.

The question remained – how was the image made?

Analysis shows the image on he shroud is not paint, there’s real blood in places, and only the fibres of the shroud’s top layers show discolouration – liquid has not soaked in.

John Formosa has delivered a series of talks including one in Canberra recently to high-light exciting new research into the shroud.

For his presentations, John draws on computer modelling by retired US nuclear engineer Robert Rucker.

“Rucker’s theory is that an extreme burst of ultra-violet light radiated an imprint of the body onto the shroud,” he said.

The effect of this radiation would be enough to produce new carbon atoms that would have resulted in carbon-14 testing dating the shroud to the Middle Ages.

John said another key aspect of Rucker’s research is that this burst of radiation might account for how real blood appears to have been thrust onto the shroud, not absorbed by it.

These findings and other research will be the focus of an international Shroud of Turin conference the Catenian Association is planning to hold in Sydney in late 2022 which Robert Rucker and others are expected to attend.

Should the conference go ahead, the eyes will be on Sydney and on the “unique fabric” that may yet reveal more of its secrets.

Vanessa Prail with her daughter Emma is among the tens of thousands of Canberra children now being home-schooled due to the coronavirus pandemic. Catholic schools ... Read More