Vatican: Pope Francis not in favour of optional priestly celibacy 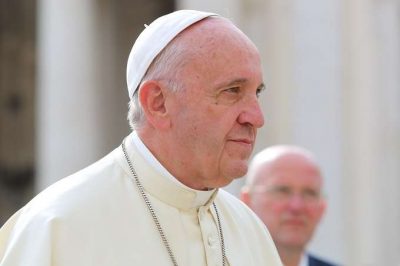 Vatican City, Jan 13, 2020 / 07:01 am (CNA) – A Vatican spokesman said Monday that Pope Francis’ position on priestly celibacy is “known,” quoting the pontiff’s remarks in a January 2019 press conference, in which he said he does not agree with making priestly celibacy “optional” in the Latin rite.

The statement by Holy See Press Office Director Matteo Bruni was issued Jan. 13 and was said to be in response to questions from journalists “regarding a recent editorial initiative.”

The initiative referred to is a newly announced book on priestly celibacy and the crisis in the Church and priesthood, co-authored by Pope Emeritus Benedict XVI and Cardinal Robert Sarah, who is head of the pope’s liturgical office.

In his statement, Bruni quoted Pope Francis’ comments aboard the papal plane to Rome from Panama Jan. 28, 2019, in which he said “personally, I think that celibacy is a gift to the Church. I would say that I do not agree with allowing optional celibacy, no.”

The pope added at the time that he thinks there is room to consider some exceptions for married clergy in the Latin rite “when there is a pastoral necessity” in remote locations due to lack of priests, such as in the Pacific islands.

Bruni’s statement also noted Francis’ quotation of the words of St. Pope Paul VI: “I prefer to give my life before changing the law of celibacy.”

The book by Benedict and Cardinal Sarah, called “From the Depths of Our Hearts,” will be published in English by Ignatius Press. It can now be preordered, and it is due to ship Feb. 20.

The announcement of the book’s publication prompted reports that by arguing in favor of priestly celibacy, Benedict XVI has placed himself in opposition to Pope Francis, who is right now considering allowing an exception to priestly celibacy by the ordination of proven married men, so-called viri probati, in the Amazon region in response to severe priest shortages.

At the end of the Amazon synod, which took place in October, the final document of the synod fathers called for the ordination of married men as priests.

The 33-page concluding document, which does not have magisterial authority, was presented to Pope Francis following the three-week meeting of bishops and representatives from indigenous communities, religious orders, lay groups and charities.

The pope’s own document on the synod, called a post-synodal apostolic exhortation, is highly anticipated, primarily for how it will respond to that suggestion and others from the synod fathers.

Bruni’s Jan. 13 statement also argued that on the topic of how priestly celibacy fits into the general work of the Amazon synod, Pope Francis is less interested in “this or that other intra-ecclesiastical point” as he is on the synod’s “diagnoses” of problems in the pastoral, cultural, social, and ecological dimensions.

At the final session of the Synod on the Pan-Amazonian region Oct. 26, 2019, Pope Francis said he was pleased “that we did not fall prisoners of these selective groups, who of the synod want to see only what has been decided on this or that other intra-ecclesiastical point.”

The Catholic Bishops of Australia welcome the Letter to the People of God that Pope Francis has written regarding sexual abuse in the Church. Read More