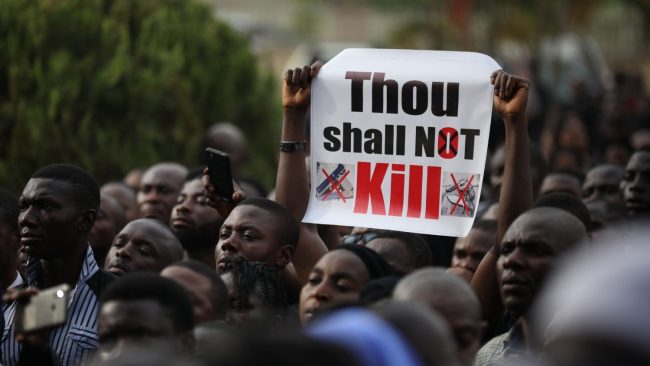 The non-Governmental organization Open Doors releases its annual “World Watch List” report that lists the top 50 countries where Christians are most persecuted for their faith.

Every day, 13 Christians worldwide are killed because of their faith, 12 churches or Christian buildings are attacked and 12 Christians are unjustly arrested or imprisoned, while another 5 are abducted.

This is according to the 2021 World Watch List annual report produced by Open Doors, a non-profit organization that chronicles persecution against Christians, guides prayers and shows persecuted believers that they are not forgotten.

Launching the report on Wednesday, David Curry, the President and CEO of Open Doors USA said that “The numbers of God’s people who are suffering should mean the Church is dying, that Christians are keeping quiet, losing their faith”. But, he continued with a quote from the prophet Isaiah, and said that’s not what’s happening “as they make their way in the wilderness and rivers in the desert.”

In the listed nations, the report says there are 309 million Christians living in places with “very high” or “extreme” levels of persecution. That’s up 260 million from those accounted for last year.

The report also says another 31 million could be added from the 24 nations that fall just outside the top 50 – such as Cuba, Sri Lanka, the United Arab Emirates.

If you do the maths, this means that 1 in 8 Christians worldwide are facing persecution. Analysing the data, Open Doors identifies some to the main trends driving the increase in numbers.

Covid-19, the report claims, acted as a catalyst for religious persecution through relief discrimination, forced conversions, and as justification for increasing surveillance and censorship. Another factor driving the increased suffering of Christians is to be found in more extremist attacks throughout Sub-Saharan Africa, from Nigeria and Cameroon to Burkina Faso, Mali and beyond.

Sudan left the top 10 for the first time in six years, after abolishing the death penalty for apostasy and guaranteeing freedom of religion in its new Constitution after three decades of Islamic Law. Yet, it remains n. 13 on the list, as Open Doors researchers noted Christians from Muslim backgrounds still face attacks, ostracization and discrimination from their families and communities, while Christian women face sexual violence.

India remains in the top 10 for the third year in a row because “it continues to see an increase in violence against religious minorities due to government sanctioned Hindu extremism.”

NEWER POSTGeorgia’s story: more than a phase
OLDER POST50th Anniversary of the tragic floods in Woden