A Spirituality of Social Justice 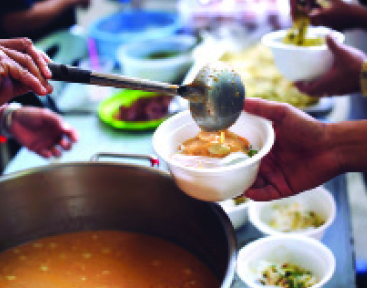 Has anyone ever been able to answer the age-old question about the chicken and the egg? I am sure there are profound arguments for the existential precedence of one over the other, but there is equally persuasive argumentation for the opposite.

As Social Justice Sunday draws closer (September 29), I was thinking of this as I began to ponder the interconnection between the faith we hold and the call we experience to live that faith in the world. Which comes first? Perhaps, as with the chicken and the egg, it does not matter. What matters is the awareness that they are deeply connected.

The Catholic faith, when well-rounded and healthy, is not solely concerned with the spiritual. This can seem counterintuitive, as you might think that ‘faith’ is only to do with spiritual things. However, central to the Catholic understanding is the conviction that the spiritual and the physical are deeply connected. This is because of who we believe Jesus Christ to be and is a consequence of taking his teaching seriously.

Jesus Christ is God expressed in human form. We experience God in Jesus, for he is God. This, then, tells us that now and for all time, the spiritual (God) finds its home in the physical (the world). We cannot live an authentic Catholic life while somehow artificially separating our faith from our real day-to-day lives. This is central to the Catholic conviction that, while belief in the life, death, and resurrection of Jesus Christ is the source of salvation, if that faith is not expressed in what we do (i.e., our ‘works’), then that faith is not real. A purely spiritual faith, not ‘incarnated’ in our lives, is not faith at all and is not capable of saving anyone. You cannot disconnect the spiritual and the physical.

The connection with Social Justice should be obvious but deserves to be unpacked. The first principle that governs our relationship with the society in which we live is that of the fundamental dignity of all human beings. While we might at times question how those we encounter may choose to live their lives, that does not undermine our awareness that they have an innate dignity that deserves our respect and, as required, our compassionate care.

There are many examples of where Jesus called those who believe in him to care for others. It can be distilled down to his teaching “love God and love neighbour” (Mark 12:30 – 31). You cannot have one without the other. But there is more to love than emotion and feelings. When Jesus speaks of loving our neighbour he tells the story of the Good Samaritan – a man who did not share the faith of the people Jesus was talking to, but who revealed in his actions a degree of love that showed the kind of person with which God is pleased (see Luke 10:25 – 37). God is to be found in those in need (Matthew 25:31 – 46), and serving them serves God.

We are so used to this idea that we can fail to recognise how unusual this was. The predominant belief had been that, if an individual or group experienced suffering or need, it was an indication that God had abandoned them. God was said to be with those who prospered, lived long lives, had many children, and made something of themselves in the world. It finds its modern equivalent in the so-called “prosperity gospel” of some more recently established Christian faith communities.

That this was not Jesus’ perspective must be taken on board. He turns the idea that health, success, etc. are a sign of God’s blessing on its head. He teaches instead that God is to be found in those who suffer. What is more, those who serve them are the sign of God’s presence and are his hands as he reaches out to care for them. How real our faith actually is, is defined not by the strength of our conviction, but by the service we show to others. All you need is faith the size of a mustard seed (Luke 17:6).

A Christian faith that does not engage with the world fails to concern itself with the struggles and needs of others, and does not challenge the neglect of the economically disadvantaged, the suffering, the immigrant, the refugee, the mentally ill and so on is not the Christian faith. Furthermore, a way of being that presumes the superiority of one gender over the other, one race over another, one social and economic class over another, is inherently neglectful of the gospel and the teachings of the Apostles. There are those laying claim to the Christian faith who, by their actions and attitudes, may have little right to do so. Social Justice Sunday is a challenge to us all.

Bishops elected as delegates to Synod of Bishops