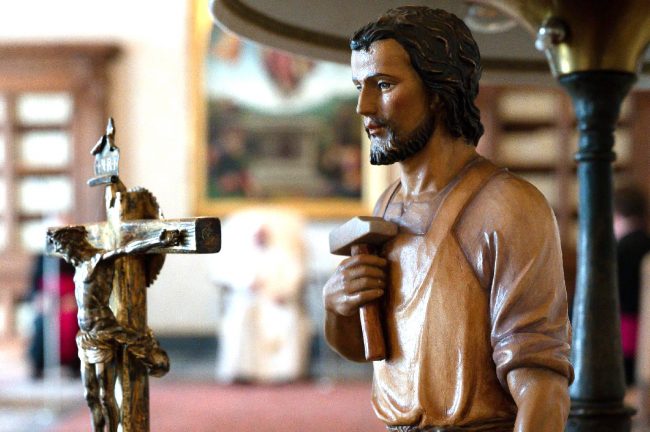 A statue of St. Joseph

“We all need Jesus,” said Dr. Greg Bottaro, director of the CatholicPsych Institute, in his keynote speech on July 15, “and we all need Jesus’ mom and dad.”

Courage International, Inc. is a Catholic apostolate for those experiencing same-sex attraction who are trying to live chastely. The five goals of the apostolate are chastity, prayer and dedication, fellowship, support, and good example. It has more than 150 chapters in 18 countries, and received canonical status in the Catholic Church in 2016

The 34th annual conference of Courage International was held at Benedictine College in Atchison, Kansas, from July 15-18. Various talks focused on St. Joseph’s example as “model of courageous love,” during the Year of St. Joseph proclaimed by Pope Francis.

In a May interview with CNA, he explained that “Saint Joseph is a model, an encouragement, and an intercessor for our members who strive to make a sincere gift of themselves and bear much fruit as disciples.”

During his July 18 closing speech for the conference, Fr. Bochanski said, “We become who we are only when we give ourselves away.”

“It’s the gift of self that shows us who we really are,” he told attendees.

In-person attendees had the opportunity to assist at daily Mass, go to confession and Eucharistic adoration, and attend private meetings and socials.

“You are truly such an important work and witness for the entire Church,” Archbishop Joseph Naumann of Kansas City in Kansas told attendees in his homily at the conference opening Mass. “Thank you for the heroic courage that you show for being a part of this ministry.”

Father Ricardo Pineda, CPM, of the Fathers of Mercy, spoke of St. Joseph as chaste spouse of the Blessed Virgin Mary and foster father of Jesus on Friday, July 16.

“No Joseph, no Jesus!,” he said. “Saint Joseph had a necessary role in the Incarnation of the Son of God.”

In his interview with CNA in May, Fr. Bochanski explained how St. Joseph’s chastity enabled him to make a total gift of himself to Mary and to God.

“When he [Joseph] became more fully aware of his vocation, the purpose and plan for which he had been created,” Bochanski said, “he was willing to sacrifice the intimate sexual expression of love in his married life, in order to live out all the other responsibilities of being a husband with greater dedication and self-sacrifice.”

Pope Francis’ prayer for the Immaculate Conception: ‘You never stop loving your children’